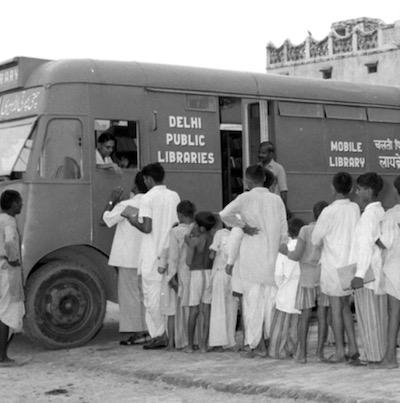 Bollywood and Bolsheviks: Indo-Soviet Collaboration in Literature and Film, 1954-1991

Bollywood and Bolsheviks: Indo-Soviet Collaboration in Literature and Film, 1954-1991, is an oral history and exhibition project that charts the dynamic literary and cinematic exchange between India and the Soviet Union during the Cold War. Combining a range of audio, video, and print material it highlights India’s role in shaping Soviet movie-going culture and the critical role that literary translation and new forms of print technology played in bringing Soviet literature to South Asian audiences.  From the casting of Bolshoi ballerinas and Soviet circus artists in hit Bollywood productions to the engagement of hundreds of South Asian translators in Soviet publishing houses, the exhibit immerses the visitor in the interconnected Indo-Soviet media and technoscapes of the second half of the twentieth century.

In the spring of 2017, the installation transformed the University of Washington’s capacious Allen Library lobby into two adjacent sitting rooms. Designed to reflect interior design trends of the 1960s and 70s, the parlor spaces invited visitors to interact with objects of Indo-Soviet cultural exchange. In the Indian parlor room, visitors could pick up and browse Soviet books and magazines translated into English and one dozen Indian languages such as Hindi, Urdu, and Bengali. The Soviet side greeted guests with Indian film reels and posters of Bollywood stars who captivated Soviet audiences from the mid 1950s until the disintegration of the USSR in 1991. Placards were interspersed throughout the exhibition space to provide visitors with more context on the historical production, reception, and circulation of these objects between the two countries. Another highlight of the exhibit (and separate online project) was the inclusion of indexed oral histories. Tablets set up in the corner of each parlor room gave visitors the opportunity to listen to the stories of the Indian translators and Indian film producers who helped build and sustain the networks of Indo-Soviet literary and cinematic exchange. All interviews were filmed and produced by exhibit curator Jessica Bachman and documentary filmmaker Emma Hinchliffe during the summer of 2016.

How have your engagements with public scholarship shaped your research?

When history PhD students begin to conceptualize their dissertation projects, they typically begin with the written historical record. They often obtain pre-dissertation research grants to travel to archives to find viable primary historical sources. These sources will help lay the foundation for their dissertation prospectus. A Mellon Summer fellowship for Public Projects in the Humanities allowed me to take an alternative approach to my historical research. During the summer of 2016, I used Mellon grant funds to travel to India and Russia to conduct and film semi-structured interviews with three categories of interlocutors: (1) Indian translators who worked for Soviet publishers between the 1950s and 1991, (2) the owners or former owners of bookshops who had once been official distributors of Soviet books (3) adult men and women working in STEM fields who grew up reading Soviet books as children. This ethnographic fieldwork developed my understanding of the linkages between the macro-level, political economic structures of Soviet book circulation and the micro-level lived experiences of the translators and readers of these texts whose voices can be hard to find in official, written sources. These interviews, made public in 2017 as part of my exhibition project, allowed me to craft a set of guiding historical questions for a project that explores how a soft-power program intended to foster goodwill toward the USSR produced unanticipated outcomes as Indian readers harnessed Soviet texts to expand their creative horizons and improve their educational and socioeconomic prospects.

The execution of my public-facing exhibition and oral history project took up a solid two years of my doctoral education. While my committee was always supportive of this pursuit, which I embarked on during my first year of my PhD program, other students and friends were advised against spending their time in a similar fashion. I was told this discouragement was anchored in advisors’ anxiety around their students’ time to completion and the potential of such projects to prolong this timeline. The assumption is that hiring committees for tenure-track positions look favorably upon shorter completion timelines for PhD candidates and raise eyebrows when a candidate appears to have taken “too long” to finish. While it is undeniable that my public scholarship project added years to my completion timeline, these early doctoral undertakings should not be viewed as impediments to success. Not only did they help me lay the foundation for a strong dissertation project, they also helped me write competitive research grants as evidenced by the comments I received from reviewers on my successful Fulbright-Hays and Social Science Research Council award applications. I would welcome a change in this pervasive attitude toward public-facing humanities projects in my field and in doctoral education more broadly. Rather than being framed to students as unproductive, potentially harmful detours, they should be presented as endeavors that carry with them the possibility to strengthen one’s intellectual and professional development.