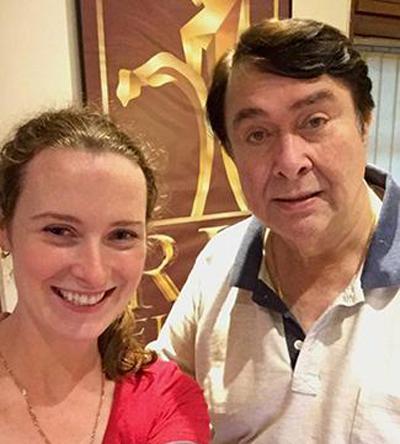 The setup reflects the cross-cultural exchange of books and film that flourished between the two states.

The project arises from Jessica’s work as a Mellon Summer Fellow for Public Projects in the Humanities through the Simpson Center. As a fellow in summer 2016, she conducted oral history interviews and built an extensive website that documents India’s role in shaping Soviet movie-going culture and the role that translation and new forms of print technology played in bringing Soviet literature to readers in India and Bangladesh.

The exhibit is designed in two halves—as a Soviet sitting room with a Bollywood film on the television, and as an Indian parlor with Soviet-translated books lining the shelves. The setup reflects the cross-cultural exchange of books and film that flourished between the two states.

“Bollywood and Bolsheviks” runs in the Allen Library ground floor exhibit space through May 31. The College of Arts & Sciences has a story by Nancy Joseph with more on Jessica’s fieldwork and how the public-minded project serves her graduate research.