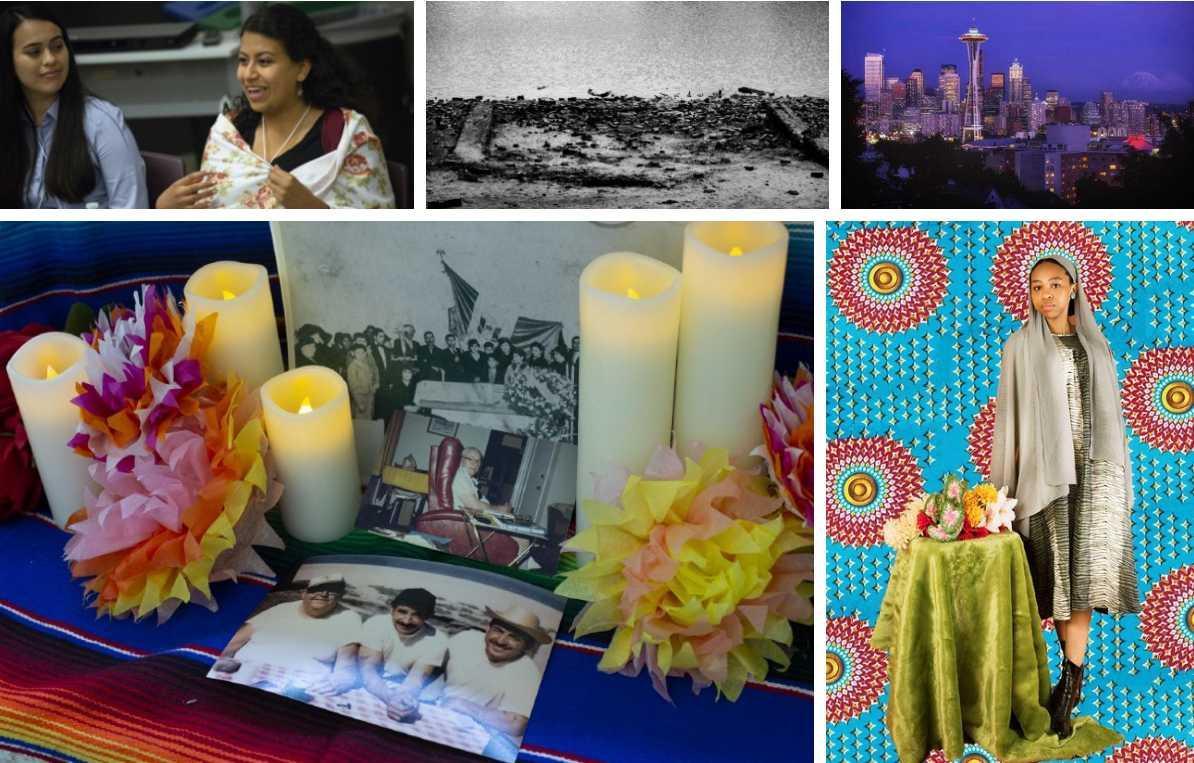 One fairly safe way to visit Seattle’s underground is to take the Pioneer Square Underground Tour, a walk through the dim subterranean passageways that run beneath the historic downtown neighborhood. Guides offer stories from the city’s gold rush boom times, peppered with anecdotes from rowdy barrooms and brothels. It’s a well-loved tourist attraction, on par with the Pike Place Market fishmongers and the Space Needle.

A more creative way to explore the city from the bottom up is to listen to the students in “Seattle's Upside Down: Unearthing the City's Deeper Histories,” a summer research institute in the arts and humanities at the University of Washington. Twenty undergraduate students across majors and campuses spent nine weeks examining the city through the lens of “dark tourism,” which is “a way of looking at a lived landscape attuned to evidence of the underrepresented stories just below the surface,” as co-instructor Scott Magelssen put it.

They took more walking tours than perhaps any course besides a study abroad program. In fact, the course was something of a study abroad program at home, visiting parts of the city that many students never see, such as the industrialized Duwamish River and the alleyways of the Chinatown-International District. Students discovered limitations of some of the city’s tourist attractions and drew on a central insight of critical geography—that maps and tours are always instruments of power, highlighting some stories and obscuring others. They emerged with new tools for amplifying voices overwhelmed by Seattle’s staggering wealth.

Staggering wealth is no idle phrase, by the way. Seattle is home to the first and second richest people on earth (Jeff Bezos and Bill Gates), the second and third most valuable companies on earth (Amazon and Microsoft), and, in recent years, the fastest-rising housing prices in the U.S., the fastest-rising population for a big city, and the third-largest homeless population. (Investigative journalist Mike Baker compiled these figures on Twitter.) Prosperity, as everywhere, is unevenly distributed.

Hardwick gathered a collection of photographs of churches, community centers, and landmarks in the Central District neighborhood, where African Americans were once forced to live through restrictive housing covenants and racist lending practices. Now, as soaring housing prices push longtime residents out of the city, the neighborhood is less than twenty percent African American.

The fruit of the students’ work is a series of research projects unveiled at an August 17 symposium. They took a remarkable variety of forms, including photo collections like Hardwick’s, videos, art installations, poems, critical texts, websites, and works of advocacy.

Alena Ahren (Media & Communication Studies, UW Bothell) contacted the Army Corps of Engineers to ask why there was no mention of indigenous history in the historical displays at the Chittenden Locks, a focal point and major tourist destination of the Ballard neighborhood. While the neighborhood celebrates its Nordic and Swedish settler heritage, an indigenous Salish welcome statue is hidden away where few people know about it, Ahren said.

“It’s really the welcome people should receive when they come to Seattle,” she said.

Elizabeth Calvillo (Interdisciplinary Visual Arts) built an installation of a family dinner table with a TV at each end. One played Fox News excerpts with anti-immigrant sentiments while the other played a Mexican news channel with more sympathetic portrayals of immigrants. The installation recreated the common working-class experience of watching the news over dinner—along with the jarring sense of living caught between two realities, Calvillo said.

The projects were both analytical and highly personal. Madi Eggerding (Comparative History of Ideas) drew on a particular medical model of immunity—the body as a biological fortress that must be kept pure from threats—and argued that extending the metaphor to urban homelessness leads to harmful recasting of people as “undesirable.” Sonia Rodriguez (Culture, Literature & Arts, UW Bothell) built a tribute altar to her uncles Moises and Mario, whose welcoming home on the northwest side was a place of comfort for an informal community. She interposed tender family photos with stories of racial discrimination. “This home has been so important to everyone in my family,” she said of her uncle Mario’s home. “It was where you could go if you needed a roof over your head. You’d be welcomed with steaks, salad, and, for some reason, shrimp cocktails.”

Brian Dang (English and Drama) interviewed his grandmother as the model for an ethnographic website, Asian Grandparents of Seattle. He translated and transcribed her story of her journey from southern China to Vietnam and the U.S., and responded with his own imaginative poems: “When my Grandma speaks, / she speaks in tongues, / with past, present, and future / braided, inseparable.”

In the institute, students learned from diverse texts about how to “read” a place critically, and they drew on the multi-disciplinary expertise of a faculty team of four. Scott Magelssen (Associate Professor of Theatre History & Performance Studies) joined Lauren Berliner (Assistant Professor of Media & Communication and Cultural Studies at UW Bothell), Jason Groves (Assistant Professor of Germanics), and Shelby Lunderman (Doctoral Student of Theatre History and Theory) in co-teaching the summer institute.

The course was frequently demanding, students said, in dwelling on injustice after injustice as the city has failed to live up to its ideals. Calvin Paulson (History) invited his audience to a digital “tour” of the 1909 Alaska-Yukon Exposition, showing how ideals of progress through technology were always embedded in the city’s hopes, even as the exposition promoted the surrounding mountainsides as ripe for logging and put native Inuit Alaskans on display for tourists to gawk. Safaa Darwish (Mathematical Thinking & Visualization, UW Bothell) showed how “resistance GIS” (geographic information systems) uses technology first developed for the military to surface hidden histories.

“I’ve learned so much from the students’ advocacy, their fierceness, their sense of justice” Magelssen said. “They are vigilant in not just giving voice to the city’s deeper histories, but to being mindful of the cultural authority behind who has the microphone, and the motivation behind why they are doing what they are doing.”

Themes of injustice and under-represented voices ran through the work. So too did creativity and moments of joy—the pleasure of bearing witness to stories despite, or because of, the fact that the world has not taken notice. Here are three more examples from students who generously agreed to share their work:

Yaran Cui (Photography) made an eerily beautiful video of the polluted Duwamish River waterfront. A soundtrack of chanting from the Duwamish tribal longhouse represents the voices of suppressed groups, while a ghostly dancer appearing and disappearing in the video represents erased figures:

Avery Gardner (Comparative History of Ideas) used his experience as a dancer to dwell on the question of how artists of color, past and present, use art to cope with hostile societies. He created a video of himself at four sites of violent racial power dynamics, dancing blindfolded to symbolize our ignorance of past injustice:

Finally, Yabsira Alemeshet Wolde (Photography and Communication) recounted the UW’s paltry numbers of African American students, staff, and faculty (only 73 of 4,249 faculty in 2016-17 are black, she said), and responded with striking portraits of three student-scholars who she interviewed about their experiences as graduate students. Finding inspiration in the painters Kahinde Wiley and Mickalene Thomas, Wolde sought to create a sense of “royalty in scholarship” in her portraits of the three students:

Students in the Summer Institute in the Arts and Humanities receive a $5,000 award through the Mary Gates Endowment for Students. The institute, now in its thirteenth year, is a collaboration of the Undergraduate Research Program and the Simpson Center for the Humanities, with additional support from Undergraduate Academic Affairs, the Office of Research, UW Educational Outreach, and the Mary Gates Endowment for Students. The program is known nationally as a model of ambitious, interdisciplinary undergraduate research at a public research university.