Talking to the Public Will Sharpen Your Work
Jonathan Hiskes 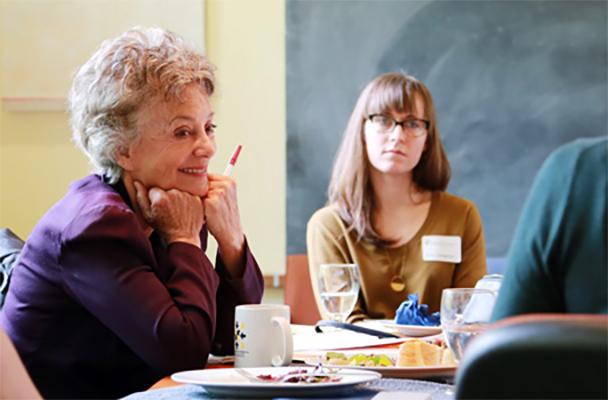 “It’s easy to make a simple idea sound complex, as thousands of postmodernist scholars can attest. The hard thing is to make a complex idea sound simple.”

Historian Stephanie Coontz challenges young scholars to explain their work to an audience more demanding than dissertation advisers or hiring committees: a 13-year-old niece or nephew.

Does your research make sense to them? Does it hold their interest? Is it clear why it matters to anyone but you?

Answering these questions — in language that a 13-year-old will understand — is a key first step to bringing scholarly work to the public, said Coontz, Professor of History and Family Studies at Evergreen State College. Her book The Way We Never Were: American Families and the Nostalgia Trap (1992, reissued in 2016) propelled her into a prolific career as media commentator, including appearances on The Today Show, The Colbert Report, The Oprah Winfrey Show, and MSNBC’s The Cycle and writing in The New York Times, The Washington Post, The New Republic, and elsewhere. Supreme Court Justice Anthony Kennedy quoted her in his landmark gay marriage opinion in 2015 — and she corrected his misreading of marriages throughout history.

Coontz held a conversation with University of Washington graduate students at the Simpson Center for the Humanities on April 5, discussing what she’s learned by speaking to the media about her research.

When scholars learn to communicate their ideas clearly, they make a public case for the value of higher education, she said. They refuse to cede the public square to those with opinions but no expertise. They help dispel “dangerous bodies of ignorance.” And, crucially, they refine their own thinking by distilling it to a short and simple message.

Meeting the media’s requirement for brevity, Coontz said, can reveal holes in one’s argument that are obscured by academic jargon.

“Simplifying things makes you a better scholar and a better teacher,” said Coontz. “It’s easy to make a simple idea sound complex, as thousands of postmodernist scholars can attest. The hard thing is to make a complex idea sound simple.”

In the conversation, Coontz fielded questions about the perils of trying to share complex ideas in the media. She mentioned the ever-shrinking soundbite, whose average length has shrunk from 43 seconds to less than 9 seconds over a few decades. She mentioned the American media’s enduring obsession with “balance,” finding opposing viewpoints to contradict any claim, no matter how well-supported by evidence. She argued that scholars must claim their place in public discourse anyway.

“If we hesitate to get out there with our research, we know that people with no such hesitation will get out there,” she said.

Her message dovetails with other Simpson Center projects to connect scholars and the public, including the Certificate in Public Scholarship for doctoral students, the Reimagining the Humanities PhD and Reaching New Publics program, and the message of William D. Adams, Chairman of the National Endowment for the Humanities, who visited in December to argue that the humanities prepare citizens to understand the complex “wicked problems” of the 21st century.

Coontz developed her public speaking skills as a Berkeley antiwar and civil rights activist, putting her doctoral work on hold after the shootings of students at Kent State and Jackson State to travel and speak about the need to build a broad-based antiwar movement. Although she thought her activism might derail her academic career, she later found a job at The Evergreen State College, where she studied shifting ideals of the American family. She was also a founding member of the Council on Contemporary Families, a national research group.

At the Simpson Center, Coontz described her first book, The Social Origins of Private Life (1988), as “pompous” and “stuffy,” relying on complex words to prove her intellectual bona fides. As she grew in confidence, she said, each subsequent book became simpler. In 1992, The Way We Never Were tapped into a charged cultural debate about the connection between family and social ills. When Vice President Dan Quayle railed against the television character Murphy Brown, a single working mother, as an emblem of social breakdown, Coontz was frequently called upon to respond.

She drew from years of research to show how the “Father Knows Best” ideal of a nuclear family was a historically recent phenomenon that often masked hidden problems of abuse, sexism, and racism and relied on often-overlooked forms of public support.

Making these points on the TV and radio taught Coontz the importance of extensive preparation, she told UW students. Writing an op-ed might take her 10 drafts. A TV appearance may require hours of rehearsing her points. These brief appearances let her convey perhaps 10 percent of what she’d like to say, so she’s learned to be ruthless about homing in on the essence of her message.

That practice of self-interrogation is something she teaches through media trainings for academics.

“Where does your research fit into a larger picture?” she asked. “What misconceptions are out there that you can correct? Why is what you’re doing important? If you can’t answer that well, if you start stammering when you get asked that question, then you need to ask yourself how you can change what you’re doing so you can answer it very well.”

Jessica Bachman, a history doctoral student and former Thomson Reuters journalist, said the conversation reminded her of her training to keep news stories simple, even when covering global energy markets.

“I was trained to write concisely and precisely enough that my grandmother would understand,” she said. “I feel myself slipping away from that habit in graduate school. Coontz reminded me that these strategies can be fruitfully applied in academic writing.”

Later in her visit, Coontz delivered the Stephanie M. H. Camp Memorial Lecture in the History of Race and Gender, honoring the achievements and gifts of Stephanie M. H. Camp, who was the Donald W. Logan Family Endowed Chair in American History at the UW at the time of her death in April 2014. Fitting with her message on clarity, Coontz’s lecture featured an abundance of concrete examples in support of a thesis on the danger of collective nostalgia.

She described how the myths of the 19th-century frontier settler and the 1950s self-sufficient family are particularly harmful, obscuring the ways American progress has always depended on collective action. In the 19th century, land grants and military support (and human rights atrocities) were integral to westward expansion. In the 1950s, the GI Bill and federal highway construction, among other measures, were key to the growth of the middle class.

While myths about rugged individualism may be especially popular on the political right, the left can fall prey to convenient fictions too, she said. Both Donald Trump’s “Make America great again” and Hillary Clinton’s “Make America whole again” suggest selective readings of American history.

”The problem that nostalgia, whatever purpose it’s mobilized for, is always based on selective memory,” Coontz said. “Ignorance is never random.”

“These myths prevent us from recognizing and adapting the social values and approaches that are part of our heritage.”

The Stephanie M. H. Camp Memorial Lecture in the History of Race and Gender is sponsored by the Department of History.