In Praise of the Welder-Philosopher

William D. Adams on the Humanities and the Common Good
Jonathan Hiskes 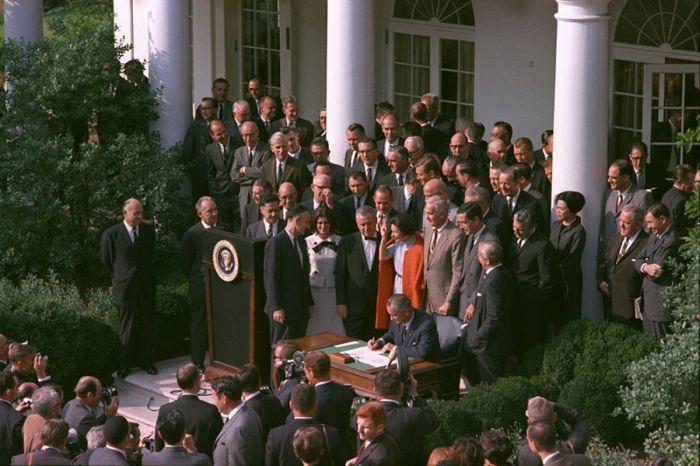 For a century we labored to settle and to subdue a continent. For half a century we called upon unbounded invention and untiring industry to create an order of plenty for all of our people. The challenge of the next half century is whether we have the wisdom to use that wealth to enrich and elevate our national life, and to advance the quality of our American civilization.

It’s a little odd to hear the chairman of the National Endowment for the Humanities praise the craft of welding as a way to show the value of the humanities, as William D. Adams did in a talk at the University of Washington on December 4.

Adams argued that the humanities offer a “deep relevance” for modern lives, not only for professionals—the deans, faculty, and graduate students gathered in the room—but for anyone who needs to navigate complex, ambiguous problems. In a 21st century democracy, that’s everyone.

He quoted a Republican presidential candidate, Florida Senator Marco Rubio, who recently said in a national debate that “we need more welders and less philosophers.”

He contrasted that by showing a photo of President Lyndon Johnson signing into existence the National Endowment for the Humanities and the National Endowment for the Arts in 1965. The signing took place in the middle of Johnson’s Great Society, an extraordinary run of legislation that included the Voting Rights Act, the Fair Housing Act, the creation of Medicaid, Social Security expansion, K-12 and college education support, the Wilderness Act, and the National Historic Preservation Act.

Johnson’s underlying message, said Adams, is that “the good life involves the centrality of arts and humanities” alongside material prosperity, protection from racial discrimination, and other measures of social flourishing. Adams quoted from Johnson’s 1964 Great Society speech at the University of Michigan:

For a century we labored to settle and to subdue a continent. For half a century we called upon unbounded invention and untiring industry to create an order of plenty for all of our people. The challenge of the next half century is whether we have the wisdom to use that wealth to enrich and elevate our national life, and to advance the quality of our American civilization.

Adams laid out four so-called “wicked problems”—modern challenges that require complex decisions and value judgments. The first is new CRISPR gene-editing technology that may bring biomedical engineering sooner than many realize. This breakthrough constitutes a significant leap in human development, but it forces profound ethical and moral questions.

Likewise, climate change has created a new era in geologic history (the Anthropocene), forcing questions of who’s responsible for historical carbon emissions and what rights poor nations possess to develop along the same fossil-fuel pathways as wealthy ones.

The Paris climate talks, Adams said, naturally call to mind the recent horrific violence in that city, and the seemingly intractable challenges arising in Syria, Iraq, and the Middle East, a part of the world that the West has “deeply misunderstood for a long time.”

Finally, he mentioned the power of new digital technology to distract and seize our attention, a phenomenon we are only beginning to understand. This technology (“given to us by people in Seattle,” he joked) has developed faster than our ability to develop norms and restraints, he said, citing the recent New York Times essay “Addicted to Distraction.”

These problems require the capacity for reflection, interpretation, and analysis—skills developed through education in the humanities.

“These are questions of history, of culture, of ideas, and values,” he said. “They cannot be resolved by technology alone. And there we understand the relevance of deep humanities work.”

His argument, delivered at the UW wǝɫǝbʔaltxʷ – Intellectual House, relied on issues that might have been the topic of conversation anywhere in America that week. The allure of smartphones, the terror of ISIS, and the bewildering twists of the Republican presidential primary all hold our attention precisely because they are so difficult to understand. As they help us comprehend these phenomena, humanistic ways of thinking become deeply practical.

Adams, a Vietnam War veteran, is a graduate of the History of Consciousness doctoral program at the University of California, Santa Cruz, and a former president of Bucknell University and Colby College. Since the US Senate confirmed him to lead the NEH in July 2014, he has launched a series of programs under the rubric of the Common Good. Those include Next Generation Humanities PhD, a program to inspire new models of doctoral education that incorporate broader career preparation; Standing Together, a program to support returning veterans and promote understanding of the military experience; and Humanities Initiatives at Community Colleges, a program to strengthen the teaching and study of the humanities at two-year institutions. He has also launched Public Scholars, a grant program to support scholars writing nonfiction books accessible to broad public audiences.

As universities find new ways to demonstrate the value of the humanities, Adams said in his talk, they can reach students eager to confront the “wicked problems” of the 21st century. Organizing undergraduate curriculum around such problems, he said, might be one way to connect specialized fields of inquiry with broad public needs. Another way: partnering with museums and cultural organizations that already have ties to the public. (The Simpson Center for the Humanities offers support for such community engagement at UW.)

The common thread in this work is the common good, a notion of well-being that extends beyond private property to include shared forms of prosperity, health, beauty, and meaning. That requires both scholars who do specialized research in their disciplines and scholars who can speak about broader topics. It also requires citizens who can draw on languages, literature, history, philosophy, and the like.

That connects to welding, Adams said, noting that he has tried welding and found it aesthetically beautiful.

Adams’ visit was hosted by the Simpson Center for the Humanities. Before his lecture, he met with leaders of Reimagining the Humanities PhD and Reaching New Publics, a new Simpson Center program to develop new forms of scholarship and teaching beyond traditional academic circles, funded by the Andrew W. Mellon Foundation. He also met with project partners from Seattle Central College and with the creators of UW projects that imagine scholarship and teaching in new forms, including Women Who Rock, and the Seattle Civil Rights & Labor History Project.