We Wandered as a Cloud 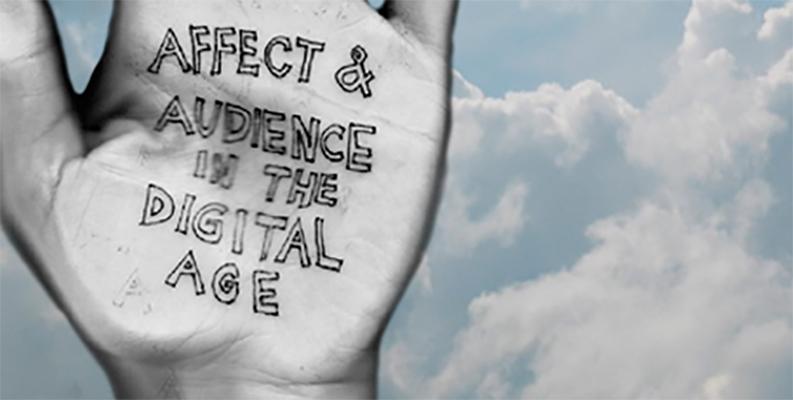 “It critiques the sense that MFA programs at times reinforce the notion of ‘individual genius,’ which isn’t always helpful.”

For William Wordsworth, clouds represented the solitude of the poet: “I wandered lonely as a cloud / That floats on high o’er vales and hills.”

The leader of the English Romantic movement contributed to our conventional view of poets. Picture the aloof figure strolling the countryside, plucking images from nature to describe his inner state. Something triggers an epiphany and he goes home to reflect on it, lonely as a cloud. In Wordsworth’s famous formulation, poetry is “the spontaneous overflow of powerful feelings: it takes its origin from emotion recollected in tranquility.”

But the meaning of “cloud” has changed in the digital age. Rather than solitude, it suggests the interconnected nature of data and people. With that shift, the possibilities of poetry are changing too.

That’s the premise behind Affect & Audience in the Digital Age, a research project at the Simpson Center for the Humanities. It’s led by Sarah Dowling and Amaranth Borsuk, two assistant professors in the School of Interdisciplinary Arts & Sciences at UW Bothell who teach in an innovative Master of Fine Arts program. They’re joined by Brian Reed, Chair and Professor of English and Professor of Comparative Literature at UW Seattle, and Gregory Laynor, Doctoral Candidate in English.

The project is part of a larger constellation of creative projects by poets and scholars taking a distinctly collaborative approach for rethinking poetry in the digital age. That approach shows that the artist’s life doesn’t have to be anti-social, says Dowling.

“One thing that often turns people off from wanting to be involved in the arts is the sense that you’re stuck by yourself in a garret starving and sweating over a project that nobody but you cares about,” she said. “It’s not a very attractive view. Thinking about methods of creation that are more social and socially engaged is a much nicer way to imagine what your life is going to be like.”

The name Affect & Audience is a response to the idea that avant-garde art is somehow cold or unfeeling, a stereotype the group wanted to explore. Instead of focusing on personal feelings alone, the group examines the concept of affect—outward manifestations of feelings or emotions. Where a feeling belongs to an individual, affect can be communal: the palpable tension in a room or the shared excitement at a wedding.

“That’s where our interests converged,” Dowling said. “There is this sense that experimental arts are about flattening out feeling and achieving a degree of distance or coolness. Even though that idea is as old as Immanuel Kant and has been critiqued a lot, it still has a lot of sway.”

Reed traces the need for affect studies back to the rise of modernism in the 1920s. Modernist scholars distrusted emotional responses to art as too personal and subjective (and perhaps too feminine) to study rigorously. Critics like T.S. Eliot looked for objective methods to study the form and structure of a text. How readers feel about a work of art didn’t interest formalist critics, says Reed.

Over the last several decades, that has changed.

“What we’ve seen, slowly, is a recognition that the reason people go to movies and read books is all about experiencing intensities of emotion,” said Reed. “Scholars have realized they need to have a theory of emotion in order to talk about how texts move people and change people. Minus emotion, you can talk about those things, but you don’t get very far.”

So the group hosts writers like Kate Durbin, whose book E! Entertainment (Wonder, 2014) reads like a series of recaps of “Real Housewives” style TV shows. Her vignettes are packed with group emotion and drama, says Dowling. It was fitting that her reading wasn’t a solitary performance but a group reading, with audience members cast as reality-show stars.

“Maybe we haven’t seen this an appropriate subject for poetry because it seems coarse or ridiculous, but this is what people like,” said Dowling. “People really connect with it and get pleasure from it. So I think it’s very interesting to look at that through a different lens.”

The group behind Affect & Audience in the Digital Age recently published an e-book by the same name, curated by Borsuk, that captures discussions about the future of poetry from a 2013 colloquium at the Simpson Center. Presented as a series of two-person dialogues, the book represents the conversational nature of the group’s inquiry.

“Since the work we’re talking about is about breaking boundaries and opening conversations, we wanted to create something in the spirit of what we had done,” said Reed. “The book is a joint statement, but it’s a joint statement in different directions. We did not force conformity.”

The conversations in the book test the idea that poetry can be more than solitary thinkers dwelling on their inner thoughts (although there’s a place for that too!).

For Dowling, that conviction guides how she teaches her students, who typically include speakers of multiple languages. Together they manipulate text through Google Translate and other online translators, including deliberately “bad” ones. Running text through several languages and back to English yields up delightfully weird results that reveal both the limits of auto-translation and the essential strangeness of language.

“That has been quite productive for me not just in teaching but in my own work too,” Dowling said. “It’s a way of making my relationship with language a little more strange.”

Another speaker at the 2013 event, Canadian poet Rachel Zolf, works with optical character recognition (OCR) technology that can digitize vast amounts of historic documents—albeit with occasional errors. In her book Janey’s Arcadia (Coach House, 2014), Zolf examines historical records from European settlers colonizing First Nations people in what is now Canada. OCR serves as both a useful tool and a metaphor: like colonists, it brings unprecedented power but also great potential for error and misunderstanding.

The Affect & Audience group draws inspiration from Claudia Rankine, whose Citizen: An American Lyric (Graywolf, 2014), a National Book Award finalist, compiles micro-aggressions experienced by Rankine’s friends and colleagues. Rankine tells stories in the second person, so that “you,” the reader, gain a sense of the insults felt by racial minorities in the United States.

Dowling also cites flarf poetry that gathers unconventional material, such as search-engine queries or online hate speech, and arranges it into poems that would be considered ugly or inelegant by conventional standards. What these diverse works have in common is the way poets function as sculptors of language, finding promising new materials to manipulate and shape.

Of course, poetry hasn’t stood still since the Romantic period. Poets and artists for centuries have experimented with new media and responded to both high-brow and low-brow culture. Wordsworth himself was a collaborator, working with Samuel Taylor Coleridge to reflect the language of everyday people in Lyrical Ballads (1798).

As the Affect & Audience group continues, they join a long conversation about experimentalism and tradition, and solitary and communal creation. On Friday, May 22, they host multi-genre writers Joyelle McSweeney and Don Mee Choi for a discussion about writing across languages.

Another creation the group has celebrated, The Tolerance Project by Rachel Zolf, solicited contributions for a large online document exploring the value of tolerance. Zolf calls it her “crowdsourced MFA.” Her method suggests that even old-fashioned notions like wisdom belong to the collective and not just the individual.

Said Dowling, “It critiques the sense that MFA programs at times reinforce the notion of ‘individual genius,’ which isn’t always helpful.”

“It takes a community to sustain a creative practice.”

Get the free e-book Affect & Audience in the Digital Age from Essay Press.
Topics
Affect Studies
Poetry
Language and Literature