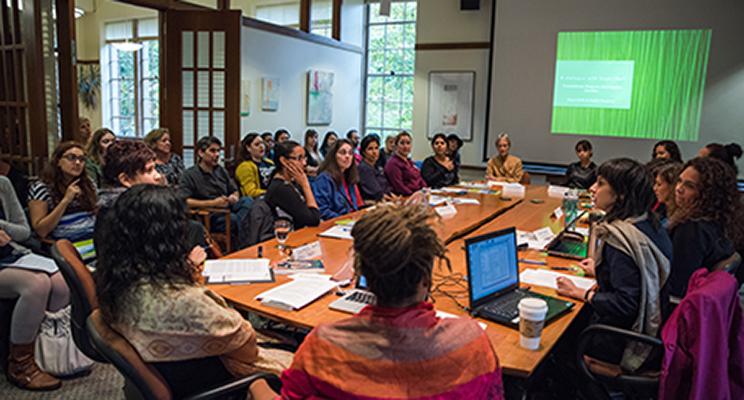 Hall is a theorist who has had a profound influence in multiple disciplines, and whose work on race, ethnicity, and difference resonates strongly with the research of WIRED members and the mission of the group as a whole. A discussion of Hall’s life and work, we believed, would present a unique opportunity to articulate connections and disjunctions, identity and difference, conflict and community within our group.

Since 2007 WIRED (Women Investigating Race, Ethnicity, and Difference) has been active at the UW, involving approximately forty faculty from across all three campuses and representing the humanities, arts, social sciences, and natural sciences. The Simpson Center has funded this group, which is comprised of assistant and associate professors interested in exploring issues of race and gender, as a crossdisciplinary research cluster for three years.

WIRED regularly hosts events and activities, such as writing retreats, peer mentoring meetings, and tenure workshops. This year, WIRED’s research committee—a subgroup of WIRED members working to highlight research within the group—has organized a series of events around the life and work of Stuart Hall (1932-2014), a public intellectual whose contributions to interdisciplinary dialogue and social justice resonate with WIRED’s overall goals.

According to Khullar, who serves as the committee’s chair, the idea for this year’s events grew organically from discussions WIRED members had after learning of Hall’s passing last year. “His writing and thinking mattered to many of us, who share Hall’s commitments to cultural studies, creative practice, political life, and public engagement,” she says. “Hall is a theorist who has had a profound influence in multiple disciplines, and whose work on race, ethnicity, and difference resonates strongly with the research of WIRED members and the mission of the group as a whole. A discussion of Hall’s life and work, we believed, would present a unique opportunity to articulate connections and disjunctions, identity and difference, conflict and community within our group.”

The first of this year’s events, a half-day symposium at the Simpson Center on Oct. 17 titled “WIRED Speaks with Stuart Hall,” brought together WIRED members in sessions on identity, ethnography, culture, and post-. Presenters placed their research in conversation with that of Hall, and some offered genealogies of his influence in their work, across the fields of public health and literary studies, in the study of contemporary American media and colonial Latin America, and through analyses of pioneering folklorists and ethnomusicologists in the American South during 1930s and Indian IT workers in Germany in the 21st century. See a list of participants and subjects.

WIRED members are excited about the avenues of collaboration that are opening up through their collective examination of Hall’s work. For Habiba Ibrahim (English), the symposium provided an occasion to hear how historical time and culture are thought across disciplines. This was especially significant to her as she is working on a book manuscript entitled “Out of Time.” Her project examines how contemporary African American literature engages two concomitant discourses about late twentieth-century historical emergence—postmodernism and neoliberalism—through the metaphor of age and aging. At the symposium, she chaired a session on the concept of the “post-”, during which Ralina Joseph (Communication) and Sareeta Amrute (Anthropology) presented their research on genealogies of the postcolonial and the post-racial.

Amrute is also at work on a book. Called Encoding Race, Encoding Class: An Ethnography of Indian IT Workers in Berlin, it explores race and class in the Indian IT diaspora. For her presentation, Amrute reviewed Hall's corpus on race and postcoloniality to uncover a method of analysis that links the study of social forms with the history of economic change in a nuanced way. In her own work, Amrute says she uses an approach drawn from Hall, among others, to explore how the development of cognitive capitalism in global coding economies also requires the embodiment of programming labor through transnational schemes of racialization and global aspirations to be middle class.

Additionally, the symposium gave WIRED members Maya Smith (French & Italian) and Manka Varghese (Education) an opportunity to collaborate across disciplines and create a presentation on transnational, diasporic, and linguistic identities. They are now working together to convert their presentation into an article for publication in a journal focused on language, identity, and society.

WIRED members hope that those attending this year’s events not only learn more about Stuart Hall and the major influence he has had over a number of disciplines, but they also hope to showcase the intellectual force of WIRED across campus and demonstrate how to build conversations between scholars who may not generally think of their projects and research interests as related.