Preserving the Lessons of the Seattle-SeaTac $15 Wage Victories 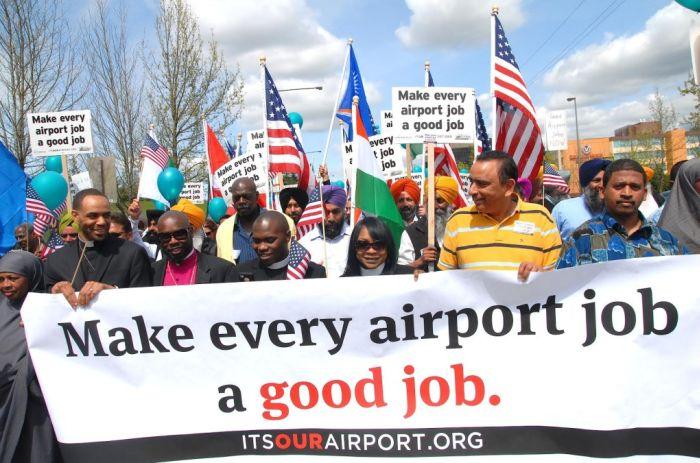 “Preserving the history of social movements is always important, but doubly so in the case of the minimum wage campaign because so many other communities are considering similar efforts.”

For Jan Bolerjack, pastor of Riverton United Methodist Church, the tipping point was seeing people line up at her food bank wearing jackets with the name Menzies—the contractor for baggage handling at Seattle-Tacoma International Airport. Workers unable to pay for basic groceries convinced her of the “economic catastrophe” of low-paying jobs at the airport.

For Mohamed Ileye, imam of the Al Noor Mosque near the airport, the defining moment was a “pray-in” rally by Teamsters union members at the rental agency Hertz. The union joined East-African immigrants in demanding the right to pray during the work day at Hertz, which had fired 25 Muslim workers over the issue.

For Don Liberty, owner of nearby Bull Pen Pub Bar & Grill, the reasoning was simple: Better-paid workers would have more money to spend at his business.

This alliance—unions, religious groups, immigrant and community groups, and some local businesses— led to two of the most important workers’ rights victories in recent history. In 2013, the city of SeaTac passed a voter referendum raising the minimum wage to $15, the highest in the nation. The measure passed by a mere 77 votes. Six months later the city of Seattle reached its own agreement to raise its minimum wage to $15, phased in over several years.

Now a groundbreaking digital project at the University of Washington is preserving the knowledge of the SeaTac and Seattle victories, ensuring that scholars, activists, journalists, and others can learn from the hard-fought campaigns. The SeaTac-Seattle Minimum Wage Campaign History Project offers a repository of oral history interviews (videos, audio, and transcripts) with key players, along with rally signs, campaign website captures, media coverage, analytical essays, and a timeline of wage increases nationwide.

The archive tracks the experiences of both leaders and airport workers who volunteered to knock on doors. The campaign group Working Washington registered nearly 1,000 new SeaTac voters in the working-class city of 27,000, which turned out to be crucial in the narrow victory. Many of those volunteers were immigrants new to the democratic process, said Michael W. McCann, UW Professor of Political Science, Director of the Harry Bridges Center for Labor Studies, and co-director of the archive project.

“Many of the workers spoke about how the law changes their lives because they will have more money,” McCann said. “But they also spoke about how it gave them an incredible sense of agency. They changed the world in which they are a part. They participated in democracy in action.”

The archive launched in January 2016 and will continue growing over time. It’s hosted by the Labor Archives of Washington, part of UW Libraries, which is developing digital-preservation practices to ensure the archive outlives changing technology and file formats, a persistent problem for digital scholarship.

The project is inspired by a model of public history websites developed by UW Professor of History James Gregory on the Seattle Civil Rights and Labor History Project and subsequent websites. Those projects present history in visual, interactive ways that can attract broader audiences than traditional scholarly books.

“It is going to be an extraordinarily rich historical record,” said Gregory, an advisor on the project. “Preserving the history of social movements is always important, but doubly so in the case of the minimum wage campaign because so many other communities are considering similar efforts.”

McCann and project co-director Conor M. Casey, Labor Archivist at Labor Archives of Washingon, built a team of undergraduate and graduate students trained in labor studies and preservation methods. They interviewed more than fifty people, including airport workers, neighbors, union leaders, politicians, journalists, religious leaders like Bolerjack and Ileye, and business owners, including both supporters and opponents of minimum wage reform. They also collected picket signs, sashes, banners, buttons, and other physical artifacts that illustrate how the diverse coalition found a sense of shared purpose.

“There’s a very rich symbolic artistic and cultural tradition in the labor movement that signifies and builds community,” said Casey.

The team heard from supporters compelled by moral arguments: Those who work shouldn’t live in poverty. They also heard pragmatic arguments that better wages are good for capitalism, because a stable working class has more money to spend. Nick Hanauer, the billionaire Seattle investor, said as much in a widely-read Politico Magazine essay, “The Pitchforks Are Coming… For Us Plutocrats,” and in an interview with the research team.

In 2013, in the shadow of the Great Recession, when “austerity” figured more heavily in national politics than workers’ rights, the victories were instrumental in driving national conversations toward the growing inequality gap. Los Angeles, Chicago, San Francisco, and other cities followed suit with their own minimum wage increases.

The wage increases came with a suite of complementary policies, some of them just as important to low-wage workers. Those include paid sick time, more consistent scheduling, protections against wage theft, requirements to offer full-time work before hiring more part-time workers, and successorship clauses to protect workers when vendor contracts change hands.

Many SeaTac workers, however, have yet to see the benefits they won. Alaska Airlines has led an appeal arguing the law should not apply to the airport itself, which is managed by the Port of Seattle. The Washington state Supreme Court ruled in favor of workers in August 2015, but Alaska Airlines has appealed that decision and withheld wage increases. If workers prevail, they will receive significant back pay dating back to 2014, but that’s a painful delay for those living near the poverty line. (The law is also restricted to businesses of ten or more employees.)

In Seattle, a decision came more quickly, propelled by the endorsements of mayoral candidate Ed Murray and City Council candidate Kshama Sawant. When they both won in November 2013, Murray assembled a commission of worker’s advocates, business leaders, and others, and told them to find a compromise. Several months later the group reached a plan, which the City Council passed unanimously.

The city’s new Office of Labor Standards, which helps enforce policies regarding paid sick leave, tipping, and related issues, is one more innovation other cities can learn from, says Riddhi Mehta-Neugebauer, a UW political science doctoral student on the archives team.

The Future of Labor Unions

Of all the questions the new archives can help address, one looms largest for McCann: How can labor unions reclaim influence in a globalized economy? The SeaTac referendum came about precisely because of the shrinking power of unions in the airline industry. In 2005, Alaska Airlines fired nearly five hundred union baggage handlers and replaced them with workers employed by contractors. Where the union workers made approximately $13 an hour, the new employees began at less than $10.

A local Service Employees International Union (SEIU) chapter provided most of the funding for the SeaTac campaign, but it was the coalition-building that proved decisive, McCann said. After the Teamsters rally at Hertz, Ileye, the imam, told the website Reclaiming the American Dream, “That is the reason why we came out in support of the union. Because we saw that for the union, this is not only a money issue. The unions support and respect the values and social rights of the people.”

McCann, who has studied organized labor since he worked in high school to desegregate all-white building trades in Florida, believes unions can be strongest when they fight for the well-being of all workers, including minorities and new immigrants.

“In the greatest moments for labor during the twentieth century, unions had primarily seen themselves as agents for the entire working class, not just their own members,” he said. “They fought for Social Security and other policies that helped everyone. That declined somewhat after World War II, and I think what’s happening with the minimum-wage campaigns is a resurgence of that commitment to improving the lives of all workers.”

The SeaTac-Seattle Minimum Wage Campaign History Project is supported by the Simpson Center for the Humanities and the Harry Bridges Center for Labor Studies.