"Her work is buoyed by her optimism in the potential of sustained collaboration to create spaces of music and thought. What has emerged is something altogether precious and enlivening. An inspiring intimacy in public. A powerful public intimacy."

It takes creative words to describe the energy that Michelle Habell-Pallán conjures through her boundary-breaking scholarly projects—the work that has earned her the 2017 Barclay Simpson Prize for Scholarship in Public.

When her colleagues describe her work, they reach for phrases like the “ineffable joy,” in Priti Ramamurthy’s words, that Habell-Pallán cultivates through the community workshops of the Women Who Rock: Making Scenes, Building Communities project.

Deborah Wong describes the new forms of knowledge production that “burst into being” through projects like American Sabor, a collaborative, bi-lingual celebration of the contributions of Latinas and Latinos to US pop music, which Habell-Pallán has helped create as a traveling museum exhibition, a web collection, and now a forthcoming book.

Bruce Burgett describes the divisions between scholarship, public life, and community that grow “wonderfully blurry” in Habell-Pallán’s work, including her leadership as the new director of the UW Certificate in Public Scholarship.

Tellingly, when colleagues discuss Habell-Pallán’s work, they look beyond her to the people she gathers together—fandango dancers, punk musicians, cultural studies scholars, graduate students, and those who have never set foot in a graduate seminar.

Ramamurthy describes the people who came to the last Women Who Rock gathering, in the historic Washington Hall in Seattle’s Central District: “They came to paint, tell stories, eat, drum, dance, sing, and sashay; to remember and celebrate those who were there, and there only in spirit,” said Ramamurthy, UW Professor and Chair of Gender, Women & Sexuality Studies. “They came to discuss and debate the most critical issues of the day.”

When Habell-Pallán, UW Associate Professor, Gender, Women & Sexuality Studies, describes her own goals, she uses the Spanish word convivencia, or co-living, to describe the work of building trust through time together.

“It’s about the co-creation of social space within the context of social inequality,” she said. “We recognize inequality, we don’t pretend it’s not there, and we still engage with each other.”

Convivencia gets to the heart of the scholarship celebrated by the Barclay Simpson prize. The award, named for the philanthropist who endowed the Simpson Center for the Humanities in honor of his father, recognizes UW scholars who practice humanities scholarship as a public good.

“Barclay Simpson believed that strong ties between people from our communities and our universities are essential to the creation of public goods,” said Kathy Woodward, Director of the Simpson Center and Professor of English. “Michelle shares that belief. Her work is buoyed by her optimism in the potential of sustained collaboration to create spaces of music and thought. What has emerged is something altogether precious and enlivening. An inspiring intimacy in public. A powerful public intimacy.”

The Sound of Collaboration 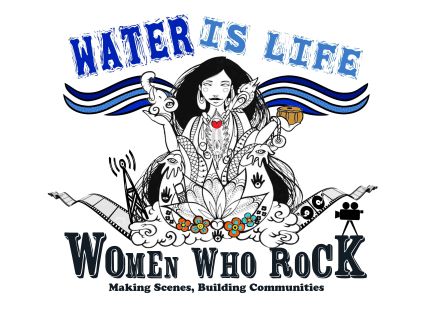 Habell-Pallán becomes the second recipient of the award, after Jim Gregory, UW Professor of History, who leads the ongoing Seattle Civil Rights and Labor History Project that presents regional history to the public. The series has grown into an expansive network of websites that have drawn more than 6 million page views from high-school teachers and students and others.

Like Gregory, Habell-Pallán has brought together disparate collaborators, achieving more than any one scholar could accomplish and training graduate students along the way. Like Gregory, Habell-Pallán has pioneered new scholarly methods that others can emulate. Her work is at home in both scholarly journals, where she reflects on her work, and in the concert halls of punk bands like Girl in a Coma, whose raucous guitar feedback provides her with a potent metaphor for the fertile interplay among artists, scholars, and community members.

Through her childhood in a working-class Southern California neighborhood, Habell-Pallán came to appreciate punk’s ethic of inclusiveness.

“Punk music was appealing to me because it’s a way to say ‘It’s all right to be a misfit and an outsider,’” she said. As one of the few Mexican-American students in majority white high-school, she found in punk “an ethic that cares about people rather than marginalizing them and treating them terribly based on their skin color. And a language to speak back to teachers who justified social inequality.”

Deborah Wong, Professor of Music at the University of California, Riverside, who has participated for some six years in Women Who Rock work, sees that ethic play out through Habell-Pallán’s career.

“The key throughline in Michelle’s work is her brilliant ability to create spaces where women, and especially feminists of color, can come together to generate good work and new critical models,” said Wong.

In a time of division between the academy and broader publics, her work provides models for building new connections based in trust.

“Her work is not simply academic scholarship that finds a broad public,” said Burgett, Professor and Dean of School of Interdisciplinary Arts & Sciences at UW Bothell. “It is transformational scholarship created in dialogue with publics and communities the university has been designed to exclude.”

As an MA student at the University of California, San Diego, and as a doctoral student at the University of California, Santa Cruz, Habell-Pallán made the case for unconventional research into L.A.’s grassroots feminist and queer music. That led to her books Latina/o Popular Culture (co-edited with Mary Romero, 2002), Loca Motion: The Travels of Chicana and Latina Popular Culture (2005), and Cornbread and Cuchifritos: Ethnic Identity Politics, Transnationalization, and Transculturation in American Urban Popular Music (co-edited with William Raussert, 2011).

In 2003, the Paul G. Allen Family Foundation funded the American Music Partnership of Seattle, a collaboration among Experience Music Project, the radio station KEXP, and the UW. Habell-Pallán, Shannon Dudley (Ethnomusicology, School of Music), Marisol Berríos-Miranda (Ethnomusicology, School of Music), and graduate students Rob Carrol and Francisco Orozco, saw the potential for the seeds of American Sabor. Over a series of iterations, they found collaborators at the Simpson Center, the Smithsonian Institution, and elsewhere.

Working with museum curators taught Habell-Pallán about balancing the needs of different audiences. The EMP exhibit grew into a traveling Smithsonian exhibition. A book from American Sabor, bilingual and geared toward a broad audience, is in press with the University of Washington Press, co-authored by Habell-Pallán, Dudley, and Berríos-Miranda.

Later, Habell-Pallán and Sonnet Retman (American Ethnic Studies) helped develop Women Who Rock, an oral history archive and series of public “unconferences” documenting women who use pop music as a tool for social transformation. Like Girl in a Coma’s anthems, Women Who Rock participants “rock the archive” by claiming a place for women musicians, DJs, critics, fans, and others in the male-dominated narrative of rock ‘n’ roll history.

Barclay Simpson was a Bay Area industrialist who took over his father’s window-screen company and built it into Simpson Manufacturing, a publicly traded building supplies company. In 1997, he and his wife, Sharon Simpson, endowed the UW’s humanities center in tribute to his father, Walter Chapin Simpson. The Simpson Center announced the Barclay Simpson Prize for Scholarship in Public, which carries a $10,000 award, shortly after his passing in November 2014.