Ethnography of a Surveillance State 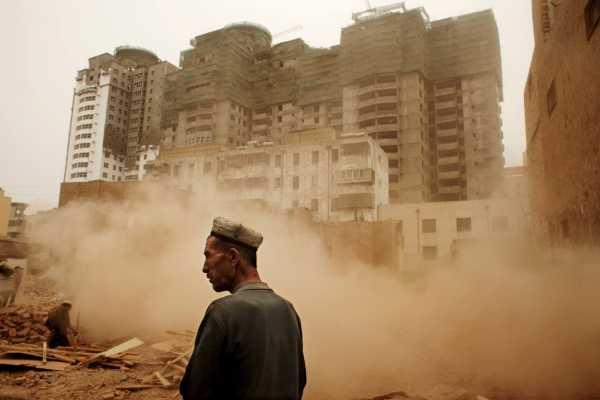 “These people are being dispossessed. But what I wanted to do with my work is figure out how people live in spite of these conditions. How they find ways to make sense out of their lives, make meaning in their lives.”

In the last three months, University of Washington anthropology student Darren Byler has spoken about his research to AI developers at Google, business leaders at the Washington State China Relations Council, and journalists at the Foreign Correspondents’ Club in Beijing. Each group has sought his help in understanding the situation of the Uyghur people in China’s far-northwest Xinjiang province.

It’s not how Byler expected to spend the final months of his doctoral program at the UW, where he studies the role of art and politics in daily life in Xinjiang’s capital of Ürümchi. But the Chinese government’s treatment of Uyghur people has changed so severely, and so quickly, that observers struggle to understand the extent of what may be the largest surveillance operation in the world. After his years of fieldwork, Byler’s deep ties in the region have been in high demand.

It’s a story whose very scale makes it difficult to tell. To begin with, most Americans need an introduction to Xinjiang, a desert and mountainous province twice the size of Texas, and to Uyghur (pronounced wee-gur) people, a Muslim ethnic minority of more than 11 million who have long lived under Chinese rule, with varying degrees of stability.

Throughout the twentieth century China has feared Uyghur separatism and has responded violently to conflicts between Uyghurs and the 10 million Han (Chinese ethnic majority) people who the government sent to settle in the region. In 2014, China declared a “People’s War on Terror,” building thousands of police checkpoints and launching a green-card system that restricted movement for millions of Uyghurs, especially young men. It sent police into Uyghur homes with a checklist to assess individuals’ “risk” of violence based on criteria such as whether they pray daily or have studied Arabic. In a culture where religion is central to identity, it banned fasting during Ramadan, required Uyghur shops to sell alcohol, and restricted practices as personal as women’s veils and men’s beards. (The AP, the Wall Street Journal, Radio Free Asia, and others have extensive reporting on all of this.)

In spring 2017, the government began sending thousands of Uyghurs to internment “re-education” camps where they are taught Chinese language and cultural practices, reminiscent of the Cultural Revolution fifty years ago. Very few prisoners have been released, and estimates of the number interned range from 200,000 to more than a million.

Again: it’s a scale that boggles the mind.

The reach of high-tech surveillance techniques is remarkable too.

Uyghurs who have smart phones must download a mobile app, Jingwang Weishi (or “Clean Net Guard”), that enables police to search their phones at stations throughout the city. The state collects Uyghur DNA samples, fingerprints, blood types, facial imagery, and audio recordings for voice recognition, creating a massive registry of biodata. When buying a kitchen knife, Uyghurs must have their ID data etched onto the blade as a QR code—ostensibly for tracking if it is used in a crime.

International journalists say it’s perhaps the most important story in China. Yet it’s a difficult one to cover, since few of them speak Uyghur, they are trailed by police when they report in the region, and talking to people about the situation can put their sources at risk—thousands of Uyghurs have been disappeared for lesser acts.

Reporters have turned to Byler for analysis and connections to his network of Uyghur contacts in Xinjiang and abroad. Economic leaders and AI developers have asked him to speak about his firsthand experience with new surveillance operations. (He describes being stopped at a checkpoint and escorted to a police station on his most recent trip in April.)

“The effect of all the monitoring is to project absolute authority and to create fear,” Byler said in a presentation at Google’s Seattle office in April. “It becomes normalized. You expect to have your phone checked every day and your ID checked a dozen times a day. You also expect to have relatives taken to these camps. Almost everyone knows someone who’s been taken. You don’t know if you might be next.”

The official state goal is creating stability and avoiding violent jihadi movements (Syrian militant groups have tried to recruit Uyghur immigrants living in Turkey). But Uyghurs say the intent is to break their spirits and eradicate their culture.

“They blacklisted me,” Parhat Imin, a fruit vendor who found himself unable to pass checkpoints, told the Wall Street Journal. “I can’t go anywhere.”

Byler’s first fascination with Ürümchi was not the political conflict but the artistic life of the city, which for centuries has been a multicultural, multiethnic crossroads along the ancient Silk Road. He first visited as an undergraduate in 2002 and returned several times to study the language and conduct fieldwork, including two year-long trips with his partner, Jennifer, in 2011 and 2014.

As he studied the existing scholarship on Xinjiang, he learned that much of it focuses on “the discourse of oppression.”

“There are good reasons for that,” he said. “These people are being dispossessed. But what I wanted to do with my work is figure out how people live in spite of these conditions. How they find ways to make sense out of their lives, make meaning in their lives.”

As an anthropologist, he knows that reducing a city to a single narrative—whether human-rights victimhood or the Chinese party line of “harmonious development”—flattens and diminishes the culture. For his field research, he took paintings, videos, and works of literature into neighborhoods to interview people about how these representations of their lives spoke to their condition. He found art imitating life, responding to ever-increasing monitoring through references in literature and visual art. He found a pop star subtly navigating the demands of his audience and state censors, a state-sponsored street mural team supporting anti-Muslim propaganda, and a painter exploring hardship among rural jade pickers for a show at the 2012 Xinjiang Biennale.

He was drawn to theorist Gayatri Spivak’s argument that without learning the “deep language” of a culture, translation becomes another form of top-down exploitation, “because translation in fact is a matter of power.” As he developed friendships in Ürümchi, he met artists eager to have their work reach the wider world. He began translating the work of Uyghur poets for publications such as Guernica, Banango Street, and Paper Republic. He launched a lively website, Art of Life in Chinese Central Asia, that features poetry, short films, photo essays, and other art forms showing the full dimensions of life in Ürümchi. Like his dissertation, it includes Uyghurs along with Han migrants from eastern China, other Muslim minorities, and people from across Central Asia.

“I think both Han and Uyghur individuals have trusted him with their stories because he really listens,” Welland told me. “He is not interested in taking sides or finding heroes but in analyzing how the state and larger structural forces—transnational capitalism, the war against terror, and the spread of Islamophobia—continually incite and take advantage of these fault-lines.”

During his yearlong trip in 2014, Byler became friends with Tahir Hamut, a prominent poet, filmmaker, and free-speech proponent whose story illustrates the difficulty of political advocacy for Uyghurs. After being imprisoned and blacklisted from jobs in China, Hamut fled with his family to Virginia, where he is seeking political asylum. He spoke to the Wall Street Journal about his journey; the week after the story came out, his brother in Xinjiang was taken by police.

In Seattle, Byler has organized Uyghur cultural events, including a music and dance performance that filled an exhibit hall at the Seattle Asian Art Museum in 2016. He has seen fear rise as China targets the families of Uyghurs abroad who speak against the state. Byler hosted Hamut for a series of poetry readings in Seattle in March. Only a few Uyghurs came from the Pacific Northwest’s community of hundreds. They arrived late and left early, seemingly wary to be seen in public with a public dissident, Byler said.

There are good reasons to be cautious about feeding “yellow peril” narratives about China, given anti-Chinese discrimination in U.S. history, and given our own human-rights shortcomings. Yet it’s difficult to see how the situation in Xinjiang will improve quickly. Coordinated economic sanctions are unlikely, and would be unlikely to have much effect, Byler said.

The scale and pervasiveness of the surveillance suggest that China is field-testing new techniques in Xinjiang for eventual use elsewhere, domestically or abroad. According to the South China Morning Post, Ecuador has instituted a network of facial-recognition surveillance cameras in partnership with China.

“As China’s profile grows on the international stage, everyone would do well to ask if what happens in Xinjiang will stay in Xinjiang,” the Georgetown historian James A. Millward writes.

On his most recent trip, Byler found a stark decline in religious practice. Once-lively neighborhood mosques were empty, their green crescent moons replaced with red Chinese flags. Traditional Muslim greetings were no longer spoken in the streets. The neon glow of police-station lights, some every 500 meters, cast a constant reminder of the state’s surveillance.

As Byler completes his PhD this summer, he expects his future will include both scholarship and advocacy. For him, they are deeply connected, just as art and politics connect for anyone seeking to understand both inner life and outer tumult. In writing about Hamut’s starkly poetic short film Beautiful Lover (2015), Byler describes the inner lives of young Uyghurs moving from villages to the city.

“When I ask young Uyghurs why they like Uyghur folk music they often say that they feel as though they are tuning in to something timeless but at the same time something comforting and familiar,” Byler writes. “When they walk the streets of Ürümchi, with their iPhone earbuds turned all the way up, they feel like the problems they face in their lives lift a little. They feel like they are not all alone, that others have faced the same anxieties.”

Darren Byler has received a 2017-2018 Society of Scholarships fellowship and a 2016 Digital Humanities Summer Fellowship from the Simpson Center for the Humanities. He is the recipient of the Graduate Medal in the Social Sciences from the College of Arts & Sciences and a finalist for the 2018 UW Graduate Student Medal for citizen-scholarship.