Between COVID-19 and Police Violence
Kaelie Giffel and Caitlin Postal 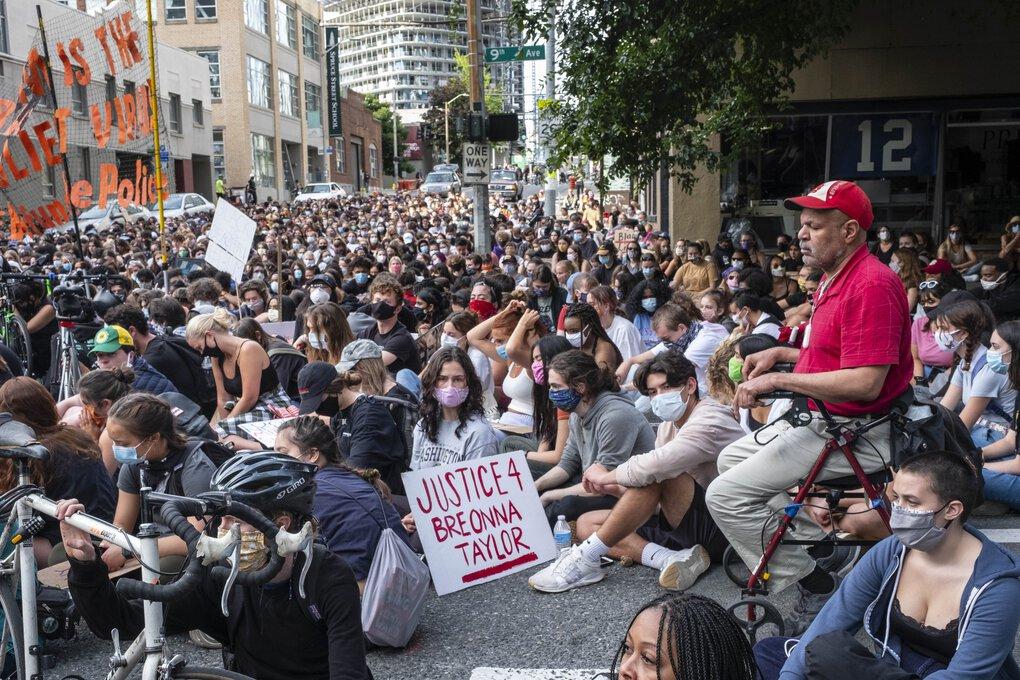 Every aspect of working life has been transformed by this moment. And we must reckon with the reality that the university is not organized for the benefit of the vast majority of people who move through and adjacent to it.

Photo: About 1,000 protesters participating in the Seattle Youth Protest sit in the intersection of Ninth Avenue and Virginia Street outside Police Department’s West Precinct. (Dean Rutz / The Seattle Times)

In the midst of a global pandemic, it can be tempting to forget that the oft-hailed return to “normal,” as Francis Eanes and Eleni Schirmer argue in their recent essay, would mean, in the context of higher education, the resumption of “all kinds of harms: spiking debt, precarious work, and social protections that fall somewhere between elusive and imaginary.” This is true for the full ecology of workers on college campuses: adjunct and assistant professors; graduate students; undergraduate student employees; and facilities, maintenance, and food service workers—in sum, all who make life on college campuses function. Every aspect of working life has been transformed by this moment. And we must reckon with the reality that the university is not organized for the benefit of the vast majority of people who move through and adjacent to it.

In this post, we explore an emerging structure of feeling amid COVID-19 around university power structures that has been insufficiently examined. Let us be frank: the structure of feeling which we term “crisis pedagogy” begins with anger, exhaustion, and helplessness, and it predates COVID-19. Yet the inequities which undergird neoliberal education have produced, as Simon Torracinta describes it, “a genuine, albeit incipient militancy, and even a tentative sense of solidarity, across the ranks of academia.” The feelings which we embody, as graduate students, and which we discuss in extensive conversation with others, register the damage enacted by individualist paradigms prevalent in our culture—in academia, in particular. We see (or at least hope) that workers within the university are motivated by these feelings to act in our collective, rather than individual, interests. Different forms of mutual aid and support are emerging between teachers and students, advisors and advisees, which indicate a sense of collective responsibility. In our view, the return to normal—per usual prizing of individual research above all, back to banking models of education, lack of accountability to local communities—would be a return to the harms that we believe are better left behind.

We do not want to seem overly sanguine. On the one hand, the rapid shift to online learning has foreclosed a slow consideration of how technology can (or should) be integrated into our classrooms. If we are to learn to use digital tools quickly, how can we question them? This elision of critical thinking around the adaptation of technology is exacerbated in certain institutional positions—that of graduate student workers, for instance. We have had to swiftly adapt to the conditions of our employment in crafting remote classes and developing online versions of community workshops. The affective labor of this transition has been particularly significant for those who occupy devalued teaching positions. As Malav Kanuga and Jaskiran Dhillon argue, “we’ve been asked to do the impossible: to maintain the university’s status quo as the world breaks apart.” Administrative reactions to perceived economic crises often render minoritized scholars and teachers and staff most expendable—the people, in other words, who are directly engaging the lived experiences of students in the midst of such crises. When Ohio University announced layoffs (140 unionized staff and 3 professors in Gender, Women and Sexuality, and African-American studies), we observed the continued devaluation of workers and minoritized knowledges. We are reminded, here, that equity is not simply about issuing statements, but about demanding permanent jobs, adequate funding, community accountability, and a curriculum that reflects the community’s interests.

On the other hand, crises can be catalysts for positive change, even as we recognize that not all change is equal, nor is it equally accepted by all. Against resignation to the continued defunding of public education, instructors in varying positions of power have collaborated—often out of necessity—to carry out the transition from in-person to online learning. Whereas Kanuga and Dhillon focus on the demands upon instructors who are caring for students, we see too how workers are connecting with workers, making demands on departments and administrations to ensure universities respond equitably to the sudden crisis rather than simply shifting the burden to the individuals within it. Union members are bringing their administrations to the table: for instance, our union, UAW 4121, has started bargaining with UW over the disproportionate economic precarity for graduate students (particularly international students) and challenges to research. Graduate students at Georgetown formalized their union as of May 8, amid the crisis. Rather than simply assuming reactive and reactionary postures, workers are teaching the institution about its own ontologies. To put it simply, we view this conjuncture as a moment of possibility.

Academic work which centers student and community needs can reclaim the university as a space for transformative change. We need to move beyond the segmentation of everything and the devaluation of everyone who is not a tenured research professor. As Brian Reed, divisional dean of the humanities at UW, said in an interview with us, “This crisis has challenged how we think about our own labor in a hierarchical institution. The three-fold mission of the university, the distinctions between teaching, research, and service, is anatomical, not conceptual. What happens when we put teaching at the core?” For Reed, the current crisis has ultimately become a question about how these distinctions have removed the university from the communities to which it is beholden, or which it imagines itself as serving. Our work in the community college setting, and in our own communities, has shown us different models of higher education that center students and local communities, rather than privileging knowledge production divorced from the exigencies of everyday life. At North Seattle College, Cristobal Borges’s history courses bring students to local spaces like the Museum of History and Industry, where students can interact directly with the material histories of the Puget Sound region. He enables them to analyze how the museum narrates histories of Indigenous dispossession and settler colonialism, asking them to critically think about how the stories we tell inform our present possibilities. Jim Jewell’s work with student storytellers shows how vital the stories we tell are to a sense of agency and a sense of belonging.

Our understanding of crisis pedagogy was developed prior to mass protests against the murders of George Floyd, Ahmaud Arbery, Breonna Taylor, Tony McDade, and the countless others that remain unnamed. And no doubt, crisis pedagogy emerged long before our formulation of it. Because for many who move through the university, all moments are moments of crisis, and describe the perpetually real conditions of learning for our students and colleagues. The collective response of communities nationwide in recent weeks remind us that universities everywhere must serve their communities in times of crisis, including ongoing crises of racial injustice and police brutality. Closer to home, demands to disarm and divest from the UW Police Department and break ties with the Seattle Police Department have been met with inaction from university administration, including UW President Ana Mari Cauce and Vice President of Student Life Denzil Suite. They remain unable to affirm that Black lives matter. It will take the rest of us to make this university a place where Black lives do matter.

We are at the juncture of anxiety and hope, to borrow a phrase from Reed. Mass protests against police violence and systemic racism intersect with university labor organizers fighting the privatization of the university. Make no mistake: privatization seeks to destroy collectivity and prevent marginalized people from accessing education and transforming their conditions; the militarization of (campus) police is one mechanism that enforces this. This crisis has laid bare things that were already true but not brought to the fore. Nothing is certain about what life will look like after the pandemic, after the protests sweeping the country. What is certain is the necessity of collaboration between workers at all levels and from all sectors of the university to not only recognize themselves as workers in common but also to act as agents of institutional and social transformation. The crisis pedagogy of this moment underscores that we are nothing without each other.

Kaelie Giffel and Caitlin Postal are collaborative Mellon Fellows for Reaching New Publics and doctoral candidates in the English Department.