Citizen Scientists in the Age of Covid-19 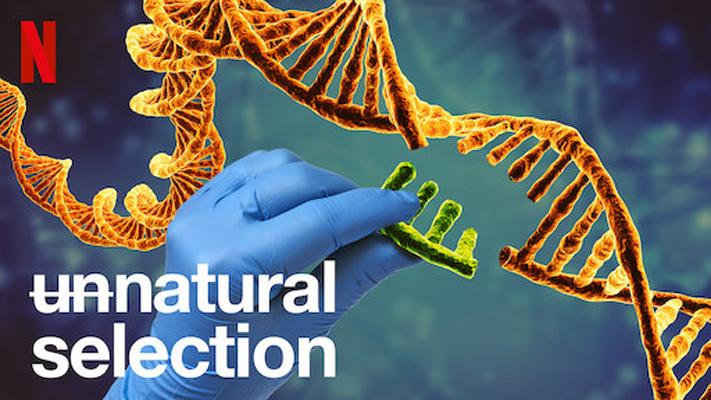 Unnatural Selection brings up lots of the different tie-ins between biohacking and libertarianism and how genomic technologies exist within a political landscape, but also this idea that academic science is very hard to navigate and is incredibly privileged and the belief that science should be available to people outside of the academy...

When the organizers of the Genomics Salon were busy planning their Spring 2020 events, there were rumblings about Covid-19, but a lockdown still seemed unlikely. Soon, however, Michael Goldberg, a doctoral candidate in Genome Sciences, found himself and his Genomics Salon co-organizers scrambling to move their screenings of the Netflix documentary, Unnatural Selection, online.

In fact, the event couldn’t have gone better. With help from the Google Chrome extension, Netflix Party, over 20 attendees were not only able to discuss the film as they watched it “together apart,” but they were also treated to a surprise Q&A with special guests: the film’s directors, Leeor Kaufman and Joe Egender.

Here, I talk to Goldberg about how the Genomics Salon hooked up with the documentary’s makers, as well as the group’s larger discussion about citizen scientists in the age of Covid-19 and the larger goals of the Graduate Research Cluster, which has received Simpson Center support for the past four years.

How did this relationship between the Genomic Salon and Unnatural Selection come about?

It was really ad hoc. We have a number of different social media outlets that we use to advertise our events. One of the big ones is our Twitter account. I had posted a tweet about our screening of Unnatural Selection when one of the director’s DMed me and asked if they could get involved, which was pretty remarkable, and this was several hours before the event. I led the directors to one of my co-organizers, Jolie Carlisle, who was co-running the event with fellow Genome Sciences doctoral student Sayeh Gorjifard. The directors and student organizers ended up running a question and answer session after the screening of the first episode of the documentary, which was incredible. They talked primarily about the process of directing the documentary, particularly about their experience working with both academics and non-academic scientists to craft narratives, but in addition about their takes on citizen science movements with regards to the response to Covid-19.

What do you mean by “citizen science movements?” And how do these movements relate to both the documentary and Covid-19?

Unnatural Selection is a documentary about a number of different things, but largely focuses on the idea of using genomics technologies to alter the human experience by improving health or by selective breeding. Selective breeding is a technique that has been used by humanity for eons, ever since we started to domesticate crops and then selectively developed wild species to do things that we as humans wanted. The landscape of both of these processes has really been changed due to a number of different recent developments in genomic technology, especially through the gene editing technology known as CRISPR. What's really amazing about CRISPR is how easy it is to use as a tool, and so this has enabled a lot of scientists outside of traditional academia—one name for them is “citizen scientists”—to access CRISPR and do their own selective breeding outside of traditional labs.

This has also contributed to a movement of people called “biohackers,” a term borrowed from computer hacking, which is often done by people from home, on their own computers. The difference is these folks hack biology. The biohacking movement is a really multi-faceted one. Unnatural Selection brings up lots of the different tie-ins between biohacking and libertarianism and how genomic technologies exist within a political landscape, but also this idea that academic science is very hard to navigate and is incredibly privileged and the belief that science should be available to people outside of the academy, which is really important.

Covid-19 links to this in an interesting way, where, in the most basic sense, everybody who is at home is essentially becoming a biohacker, because we’re developing our own pieces of biotechnology, like masks, to avoid the spread of Covid-19. That, in and of itself, is kind of the most basic way in which citizens are now also developing their own biotechnology. It sounds so simple, but it’s actually a very important concept and provides a link between the “mad scientist” folks using CRISPR and people making their own masks.

Aside from making masks, something I’ve noticed is how on top of the most recent peer-reviewed studies people are with regard to Covid-19—how widely and quickly these studies are being disseminated among non-scientists. The joke is that you’re lucky if you get more than three readers of your academic article, but that no longer seems to be the case. No longer are people sharing news stories about peer-reviewed studies, but they’re sharing and interpreting the studies themselves as they come out. Can we understand this as part of the citizen scientist phenomenon?

This is a really fascinating subject. The postdoc who works in my lab, Jed Carlson, has a manuscript out right now tracking the trajectory of scientific articles that originally get posted to Twitter and then make their way through social media, particularly articles that are human genetics related and get picked up by white nationalist and far right communities who generally memeify and twist a lot of the messaging of classic human demographic history and human genetics for their own purposes, like race genetics and White Nationalism.

But Carlson has also been watching the trajectory of a lot of these Covid-19 papers, because all of a sudden you have these really crazy sharing metrics that we've only seen in very, very rare cases before in terms of scientific articles making their way outside of the academy. For example, bioRxiv is a sub-platform of the website arXiv where researchers post their manuscripts before peer review. In general, this is really, really helpful because the peer review process is really long and a lot of articles in the sciences tend to end up in journals that have a paywall. So bioRxiv is this really great way for anyone to access research and science. But right now, we are in a bit of a different situation, particularly with the emphasis that's being placed on the bio sciences and genomics research with regard to Covid-19. The number of manuscripts that have been posted to bioRxiv that are not peer-reviewed and have largely false findings but then immediately get picked up by news outlets and are shared through social media is extraordinarily dangerous. And so, I’ve heard that bioRxiv is being much stricter about the kinds of Covid-19 articles that are being accepted.

I can't speak on behalf of the academic medical community, but in genetics, it's really interesting, because human genetics is a subject that's adjacent to many other fields, particularly in the humanistic social sciences, like Anthropology and Sociology. So, our research interacts with these fields and often extends beyond academia. Our research has a more general interest than some geneticists typically assume. That's something that we talk about all the time in the Genomic Salon. From a historical perspective, that interest isn’t rare, but this moment is a really good reminder for researchers that the things that you publish can be disseminated really, really widely, for better or for worse.

How do the Unnatural Selection screenings and the discussions you had around the documentary reflect the larger goals of the Genomics Salon?

One of our major goals is to facilitate interdisciplinary discussions. We are a group of largely trainees who are based in Genome Sciences, and so we have a lot of people who think about genetics and human genetics, but in a somewhat siloed manner. Thinking about how society affects genomics and how genomics affects society isn't necessarily what people would consider to be core curriculum in our department, or I think in many departments. But one of our central goals is to get people to think about that and see these lines of inquiry as, at least, curriculum adjacent.

That’s the conversation we’re trying to get people to have through watching Unnatural Selection. We want people to think about how a technology, like CRISPR—one we use all the time and assume is an academic-specific technology—can be used by people outside of the academy and what the implications of that are. How do we maintain conversation with those people? What happens when the publications that we put out are read by folks who are not completely trained? How do we make our science more accessible to biohackers or do we want to? Those were the central points of the screening and getting our attendees both within and outside our department to think about these things is really critical.

Another really big aspect of the Genomics Salon is that we see ourselves as a training ground. Again, we're trainees, and a lot of us are academia-bound. The Genomics Salon offers us a chance to work with alternative event formats, from film screenings and Q&As to casual discussions, to communicate with the world outside academia. In fact, the Genomics Salon was a major reason I chose to come to the University of Washington. It indicated that the Genome Sciences Department really valued and included students who were en route to becoming the kind of scientist that I wanted to become, which is one who does a lot of rigorous science and is an academic in a traditional sense, but who also fundamentally thinks about the implications of their research, thinks about scientific communication, thinks about the philosophy and ethics of science, which are all the tenets of the Salon. That’s the training I wanted. 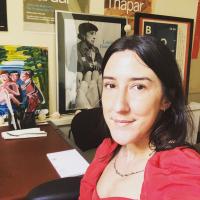 Denise Grollmus is a writer, scholar, teacher, web designer, and translator who was the Simpson Center's Communications Manager from 2018-2020.