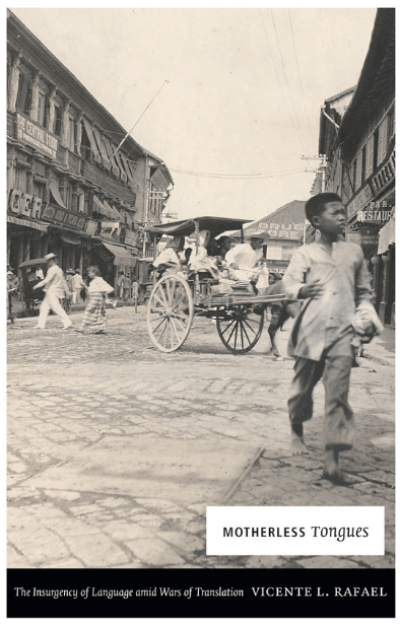 Motherless Tongues: The Insurgency of Language amid Wars of Translation

In Motherless Tongues, Vicente L. Rafael examines the vexed relationship between language and history gleaned from the workings of translation in the Philippines, the United States, and beyond. Moving across a range of colonial and postcolonial settings, he demonstrates translation's agency in the making and understanding of events. These include nationalist efforts to vernacularize politics, U.S. projects to weaponize languages in wartime, and autobiographical attempts by area studies scholars to translate the otherness of their lives amid the Cold War. In all cases, translation is at war with itself, generating divergent effects. It deploys as well as distorts American English in counterinsurgency and colonial education, for example, just as it re-articulates European notions of sovereignty among Filipino revolutionaries in the nineteenth century and spurs the circulation of text messages in a civilian-driven coup in the twenty-first. Along the way, Rafael delineates the untranslatable that inheres in every act of translation, asking about the politics and ethics of uneven linguistic and semiotic exchanges. Mapping those moments where translation and historical imagination give rise to one another, Motherless Tongues shows how translation, in unleashing the insurgency of language, simultaneously sustains and subverts regimes of knowledge and relations of power.