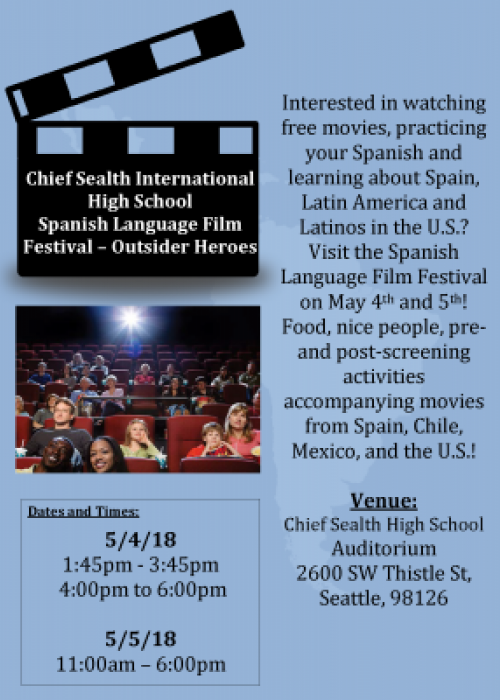 Faculty in area studies or literature and language departments are increasingly asked to organize film series, yet PhD and MA programs rarely prepare graduate students for such endeavors. Film festivals in particular offer scholars a unique opportunity to connect with broader audiences, and this course trains students in the critical implications of festival organization. Students will develop both practical curatorial experience and a greater historical understanding of the film festival as a phenomenon, while also examining what it means to translate their area studies expertise for new publics.

The cinema of the Hispanic world will be our case study. Students will study recent trends in Spanish and Latin American film, while also connecting with local and international experts in film programming, including people at the Guanajuato Film Festival, Seattle International Film Festival, the Seattle Latino Film Festival, the Cervantes Institute, and the Sitges Film Festival. Most importantly, students will work throughout the quarter in small curatorial groups to prepare a small-scale film festival for Latino high school students in Washington state, with all of the relevant accompanying documentation. This course is also listed as “Hispanic Film Programming and the Film Festival Phenomenon.” It arises from Reimagining the Humanities PhD and Reaching New Publics, a program of the Simpson Center for the Humanities that envisions new forms of public-facing and collaborative scholarship.

Leigh Mercer is Associate Professor of Spanish & Portuguese Studies and the author of Urbanism and Urbanity: The Spanish Bourgeois Novel and Contemporary Customs (1845-1925). She is working on a new book titled An Incoherent Voyage: Spanish Cinema Pioneers, Between Technophilia and Technophobia. She earned a PhD from Brown University in 2004.