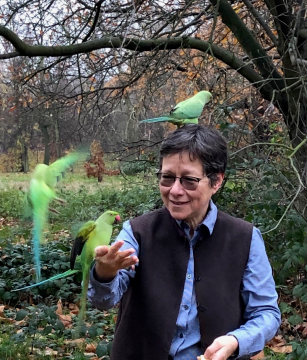 Feral Atlas and the More-than-Human Anthropocene

Humans have been unable to make the Anthropocene by ourselves. Indeed, the Anthropocene is a series of “feral” ecologies—ecosystems that have been encouraged by human infrastructures (such as dams, drilling rigs, and industrial parks), but which develop and spread beyond human control. Bringing together a hundred scientists, humanists, and artists, the Feral Atlas studies these ecologies and how they’ve changed the conditions for how humans interact with each other and with nonhuman others, whether biological, technological, or ephemeral.  Drawing on her collaborative and interdisciplinary work curating the Feral Atlas, Anna Tsing’s lecture will explore how digital visualization and storytelling might create a new community of resisters in this more-than-human Anthropocene.

Anna Tsing is Distinguished Professor of Anthropology at the University of California, Santa Cruz.  She is also Niels Bohr Professor at Aarhus University in Denmark, where she codirects Aarhus University Research on the Anthropocene (AURA). Tsing is well-known for her far-reaching and interdisciplinary work in the environmental humanities and ethnography, exploring not only how the Anthropocene extinguishes life, but also how to gives way to new modes of living. She is author of The Mushroom at the End of the World: On the Possibility of Life in Capitalist Ruins (2015) and co-editor of Arts of Living on a Damaged Planet (2017). Together with Jennifer Deger, Alder Keleman-Saxena, and Feifei Zhou, she is co-editing Feral Atlas: The More-than-Human Anthropocene, forthcoming in 2020.