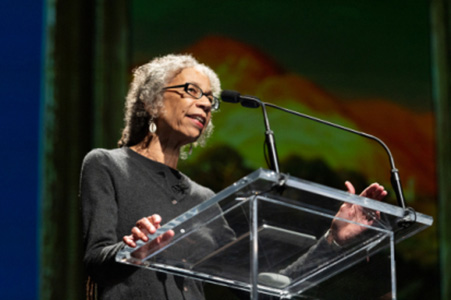 Ruth Wilson Gilmore’s work has led the way in showing that abolition is a practical program for urgent change based in the needs, talents, and dreams of vulnerable people. Scholars and community organizers join her for a conversation about decarceration and community-based approaches to generating well-being and addressing harm.

Ruth Wilson Gilmore is the author of Golden Gulag: Prisons, Surplus, Crisis, and Opposition in Globalizing California (2007). She is Director of the Center for Place, Culture, and Politics at the City University of New York Graduate Center where she is Professor of Earth & Environmental Sciences. A co-founder of many grassroots organizations including California Prison Moratorium Project, Critical Resistance, and the Central California Environmental Justice Network, Gilmore is working on several book projects. She has lectured in Africa, Asia, Europe, and across North America. Recent honors include the Association of American Geographers Lifetime Achievement Award (2020). Novelist Rachel Kushner profiled Gilmore in a New York Times Magazine feature on abolition in April 2019.