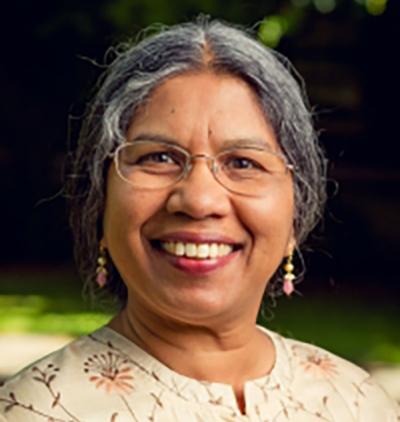 "Her research focuses on the politics of social reproduction and cultural production in rural and urban India."

Priti Ramamurthy (Gender, Women & Sexuality Studies) has received a Fulbright-Nehru Academic & Professional Excellence Award to conduct research in India for nine months beginning this winter, in partnership with Ambedkar University in New Delhi. The award, from the United States-India Educational Foundation, supports her ongoing ethnography into the complex interplay of rural and urban economies in contemporary India. From the foundation:

Her research focuses on the politics of social reproduction and cultural production in rural and urban India. An ethnographer, she has spent over three decades in villages in South India mapping lives and livelihoods in smallholder, especially Dalit, households as they embrace green revolution, hybridization, and GMO technologies and aspire for dignity. A recurrent thematic, pursued through her analytic of feminist commodity chains, and the method of connective comparison, has been how global political-economic conjunctures manifest in local, familial, and intimate relationships. She teaches courses in feminist political economy, gender and development, globalization, and social movements in India.

The informal sector in India, which was supposed to disappear with development, still employs over 90 percent of workers in uncertain rural and urban livelihoods. In 2015–16, Dr. Ramamurthy and her collaborators conducted oral histories with over a hundred rural migrants to Delhi and Hyderabad on their life experiences and desires. With her Fulbright-Nehru grant, Dr. Ramamurthy is returning to follow eight migrants back to their villages to understand urban transformations from the vantage point of the rural, recognizing that the urban and the rural are inextricably interlinked. She is also holding two workshops that theorize rural-urban dynamics in India.

Priti is organizing, with Vinay Gidwani (University of Minnesota), a December 1-2 symposium at the Simpson Center, Poetics of Subaltern Life-Worlds: New Research, New Imaginaries of Informal Economies in Contemporary India. The symposium builds on her extended research into informal economies and includes with a session on public scholarship and technologies of communication.