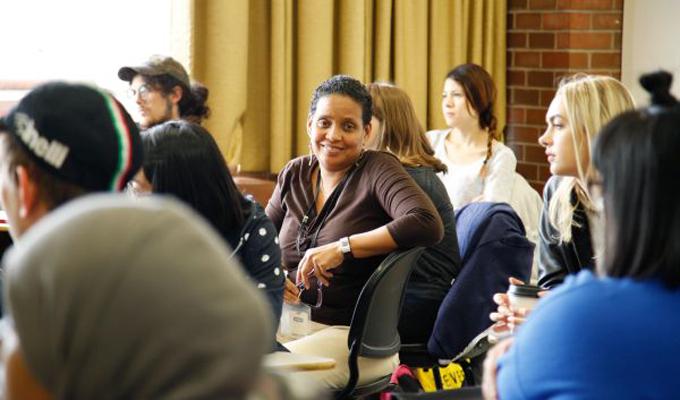 "Daniel Stofleth, a doctoral student in communication at the University of Washington, has observed firsthand the most striking difference between research universities and community colleges: diversity."

Photo: Seattle Central instructor Marian Lyles serves as a mentor in a partnership between two-year colleges and UW doctoral programs.

Rachel Arteaga (Simpson Center) has written an article for Inside Higher Ed about new partnerships between two-year colleges and doctoral programs in the humanities, drawing on her leadership of the Simpson Center program Reimagining the Humanities PhD and Reaching New Publics.

Rachel, the Simpson Center’s Assistant Director and Assistant Program Director of the Reimagining program, told stories in the piece about doctoral fellows, faculty members, and senior administrators in the program, which launched in July 2015 with a $750,000 grant from the Andrew W. Mellon Foundation.

Daniel Stofleth, a doctoral student in communication at the University of Washington, has observed firsthand the most striking difference between research universities and community colleges: diversity.

“I have attended or taught at three four-year institutions, which were all relatively homogenous,” he says. At Seattle Central College, under the mentorship of communication instructor Marian Lyles during the 2015-16 academic year, Stofleth was involved in classrooms in which “the variety of student backgrounds coalesced into some of the most thought-provoking, and often challenging, conversations I’ve been a part of in my experience as a student and instructor.” He views the diversity of the two-year college system as its core strength.

Rachel earned a PhD in English at the UW in 2016 with a dissertation on feelings of faith—among them, hope, doubt, and joy—in American literature. She has presented about the Mellon program at the 2016 conventions of the Modern Language Association (MLA) and the Humanities, Arts, Sciences, and Technology Alliance and Collaboratory (HASTAC). She will speak again at the MLA’s convention in Philadelphia in January 2017.