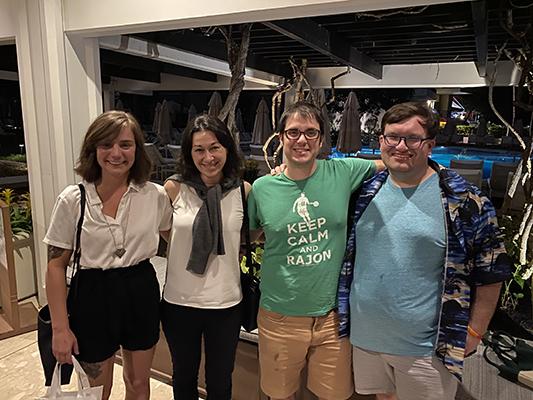 As a university-based environmental humanist, I especially appreciated the chance to share space with leaders of state councils, community-based institutions, and national funding agencies. This unique combination of accountabilities yielded many robust discussions around the vital roll the humanities ought to play in supporting the histories, voices, and practices of communities and polities who are too often excluded or erased from public discourse.

In mid-November, the Simpson Center sent three of its past fellows in digital humanities and public scholarship to the National Humanities Conference in Honolulu, Hawai'i. Their panel, “Digital Public Humanities: Navigating Community and Identity in the 21st Century,” was designed for a broad professional audience in the humanities, including leadership of state humanities councils, scholarly societies, and advocacy organizations. Sessions at the conference ranged from presentations on measuring the impact of humanities programming to discussions of place-based education (with an emphasis on the islands of Hawai'i, American Samoa, Guåhan, and the Northern Mariana Islands, which jointly hosted the conference) to workshops on grant-writing for funding opportunities through the National Endowment for the Humanities. Below, our presenters—pictured above at the conference along with the Simpson Center's Assistant Director Rachel Arteaga (second from left)—share their reflections on the conference and its contexts.

The National Humanities Conference by the National Humanities Alliance and the Federation of State Humanities Councils was an exciting experience and one of the most unique conferences I have been able to engage with and not only because of the magnificent choice in location. The conference was hosted by Hawai’i Council for the Humanities in partnership with Humanities Guåhan, Northern Marianas Humanities Council, and the Amerika Samoa Humanities Council. This coming together of the states and territories of Oceania made for a thoughtful conference that put the work of those councils in the spotlight, which meant the work was by people of color and local indigenous communities. They presented the struggles of natural disasters that affected the Northern Marianas to the struggle to preserve culture and language in Guåhan. It showed that this conference cared about bringing a diverse set of voices to the forefront and honoring the local communities we were visiting.

However, it was the Capps Lecture by Dr. Jonathan Kay Kamakawiwo‘ole Osorio and Dr. Jamaica Heolimeleikalani Osorio from the University of Hawai‘i at Mānoa that really showcased this approach. They presented a phenomenal keynote together that wove together various approaches from traditional lecture to poetry and music. The topic was a wide look at the legacy of US colonialism in Hawai’i and the political movements against US colonialism in the past but also currently with the struggles surrounding the building of a telescope on sacred lands at Mauna Kea. It showed the strength of the humanities approach to present a complicated history and tie it back to the present to understand current injustices.

Lastly, I had the opportunity to present along with my three other colleagues on our digital humanities approaches. It was a great chance to engage with both academics and non-academics as this conference attracts both. The audience came with wonderful questions and excitement for our work. It was a great conference experience and I am grateful for the Simpson Center for making this possible.

The 2019 National Humanities Conference offered a remarkable opportunity to consider the shape and scope of humanistic practice across multiple diverse publics. As a university-based environmental humanist, I especially appreciated the chance to share space with leaders of state councils, community-based institutions, and national funding agencies. This unique combination of accountabilities yielded many robust discussions around the vital roll the humanities ought to play in supporting the histories, voices, and practices of communities and polities who are too often excluded or erased from public discourse. Toward this end, the organizers made great strides to center Kanaka Maoli scholarship throughout the conference, highlighted by a keynote lecture by Dr. Jamaica Heolimeleikalani Osorio, poet and professor at the University of Hawaii-Mānoa.

Other moments, however, dramatized the ongoing contradictions between settler colonialism and enduring struggles for Hawaiian sovereignty. During what could have been a rather perfunctory panel on best practices for grant writing, a conversation arose around NEH’s special theme. “A More Perfect Union” is a theme developed as a prelude to the 250th anniversary of the United States, anticipated to occur in 2026. But what kinds of projects could be included, participants wanted to know? For example, one scholar asked, “Would the agency consider proposals that narrated with honesty, the overthrow of Queen Lili’uokalani and the U.S.’s illegal annexation of the Hawaiian Kingdom?” A panelist responded that the agency was certainly interested in diverse conceptions of the Nation, including “prior to 1776.” But this response was discordant, given that the coup occurred in 1893 and annexation in 1898. As we were gathered less than 200 miles away from where grassroots protectors were (and still are) struggling to protect Mauna Kea from desecration in the name of scholarship, this painful moment was also a call to develop an ever more accountable, ever more critical, ever more engaged humanities.

When I first received The Simpson Center’s invitation to join a panel at the National Humanities Alliance’s Annual Conference (termed simply, The National Humanities Conference, or NHC), I was uncertain what to expect. I had been to primarily academic conferences, such as the Modern Language Association (MLA) and the American Studies Association (ASA), or to creative writing conferences such as the Association of Writers & Writing Programs (AWP). I name these three, especially, because they are also considered interdisciplinary, with the primary demographics converging around specialization: literature analysis, cultural studies analysis, or creative writing publishing and teaching. I arrived at the conference site for the NHA Conference uncertain on how a conference designed to bring administrative, policy, education, and academics together would converge. It turns out, “Points of Convergence” was the theme in part, perhaps, for that reason: throughout the conference days that followed, I noticed that the most engaged panels and events asked precisely about how different facets of humanities education and research might converge to create meaningful dialogues. In this sense, the effects of the visit linger today in thinking through what this work means, as well as more in-depth understanding and appreciation for the Hawai’i Council for the Humanities, who, in partnership with Humanities Guåhan, Northern Marianas Humanities Council, and the Amerika Samoa Humanities Council invited the conference to this particular location.

Two events, in particular, emphasized this unique approach that surfaced throughout NHC: the National Endowment for the Humanities (NEH – I know, many acronyms!) opening address and the arts-based community activist Capps Lecture, Drs. Jamaica Heolimeleikalani Osorio and Jonathan Kay Kamakawiwo’ole Osorio. These two events served similar purposes for convening with conference attendees before and after panels, but produced divergent approaches to converging humanities initiatives might serve narratives of people in a U.S. continental and Pacific Island context.  I found their points of tension as much as alignment to be a productive “convergence” for thinking about the “national” and the “humanities” in the changing academic and non-academic publishing landscapes.

The NEH Chairman, Jon Parrish Peede, for instance, emphasized the statistical relevance of the NEH endeavor to support story-based humanities initiatives at a national level. This meant personalizing his speech with photos from different state visits, to listing the next “westward and eastward” places he planned to go. He bookended the talk on his memories of vacationing in Hawai’i, while the center of the talk discussed the network of he is developing between a standard for national civics education alongside and through national storytelling. This approach, which implies the necessity of a recognizably national approach to humanities education, reflected some of the work being done at the conference to think through humanities work as not centered in academic spaces, as well as its relationship to histories of civic governance; however, it also suggested a nationalized ideal for how we might integrate civics, history, and literature together to create a national narrative.

This rhetoric rang (productively) discordant when placed next to the Capps Lecture on indigenous and native Hawai’i histories around colonization. While Chairman Peede’s talk opened a full day of panels, Drs. Osroio’s performance-based lecture closed a day of panels; while Chairman Peede’s talk emphasized westward expansion and statistical relevance, Drs. Osorio’s performance-based lecture emphasized stories from native Hawai’i paired with songs both of mourning and hope. While Chairman Peede’s lecture was bookended with a memory of a childhood family vacation in Hawai’i, Drs. Osorio both reckoned with the fraught kinship relations they were building in resistance to the ongoing occupation of the U.S. in Hawai’i. More concretely: the Capps Lecture included visual aids to pair with stories of loss and resilience in the wake of ongoing historical and environmental displacement in Hawai’i interspersed with the two family members sharing songs and spoken word on the affective dimensions of processing these narratives. They ended on the present moment, drawing a line between the historical narrative, the affective kinship of resistance, and the contemporary fights for sovereignty and care for their land.

I found that these two talks – on the same day, in the same room – exemplified what I found unique to the NHC experience: a desire to expand what we consider a “lecture” or a knowledge in order to sustain meaningful dialogue. For the sake of length and more to the point, perhaps: a meaningful dialogue that does not end on print-based analysis, but instead asks how the points of convergence between academia, pedagogy, public scholarship, policy, and administrative work might create meaningful support networks for reckoning with not just a “future” of the humanities, but also its fraught history.