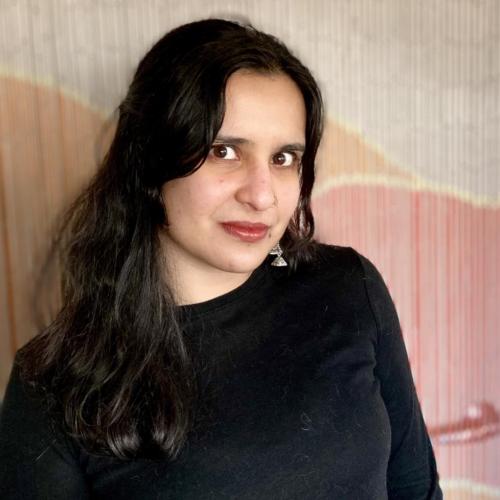 nanya jhingran is a poet, editor & scholar from Lucknow, India currently living by the coastal margin of the Salish Sea, on the unceded lands of the Coast Salish People (upon which the city of Seattle was built). She currently serves as Writer-in-Residence at The Simpson Center for the Humanities.

She is currently a PhD Candidate in Literature and Cultural Studies and an MFA Candidate in Poetry at the University of Washington, Seattle. Her dissertation reads contemporary literature by women writing in the context of 20th century partitions in Palestine, Ireland, and India and argues for feminist poetic practice as a form of social reproductive work. Her creative work asks how interiority comes to be shaped by urban experience, development, alienation, and palimpsestic histories of place, with her “home-towns” of Seattle and Lucknow particularly in mind.

Her poems have been published in print and digital formats at Poetry Northwest, Canthius, Moss. Lit, The Seventh Wave, among others. Her critical prose has been published in Honey Literary, Adroit Journal, and Language, Literature, and Interdisciplinary Studies.

She is an early career editor of non-fiction, fiction, and poetry. She is an Editorial Intern at Farrar, Straus & Giroux, an imprint of Macmillan, where she reads and assists editors across all genres. She also serves as Associate Editor at Poetry Northwest where she edits the book reviews section, reads poetry submissions, and pitches in with other editorial tasks. She organizes the “Critics at Large” program, a paid yearlong cultural criticism residency for emerging poet-critics which announces its inaugural cohort in Fall 2022.